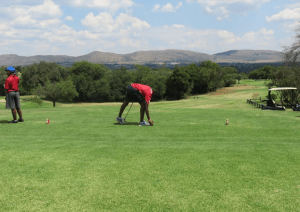 With three spots in the 2019 Canon SA Disabled Golf Open up for grabs, it was all to play for in the 27-hole event. For many of the golfers the round was even more significant as it was their first taste of nine holes on a full-length golf course.

Though many of the golfers struggled without their coaches to lean on for advice, they should be commended for maintaining a fantastic attitude throughout their rounds and for demonstrating good golf etiquette.

There were plenty of encouraging signs with three players in particular separating themselves from the field. Leading the way on 16 points is Mweli, who made a fast start as he raced to seven points after three holes, highlighted by a terrific bogey five at the par-4 12th-hole that earned him three points. After struggling on the long par-five 13th, Mweli bounced back extremely well to reel off nine points over his closing holes to ensure he’s sitting pretty heading into the second round.

Hot on Mweli’s heels is Usher Manel who signed for a handy 12-points to sit two points clear of Shange Sandile. The trio will fancy their chances of booking a return trip to Magalies Park GC for the Open next May, with the next best competitor a further two points adrift on eight points after round one.

With the coming two days’ forecast for more sweltering heat, the chasing pack will have to dig deep in round two if they are to keep their hopes of qualifying for next year’s Open alive.