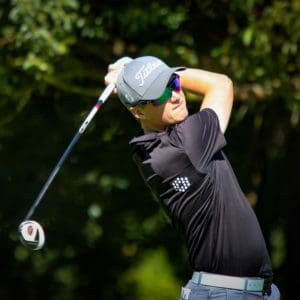 1 May 2018 – Pretoria amateur Louis Moolman was the talk of the opening day at the South African Mid-Amateur Championship after he bettered the course record to take a four-shot lead at Plettenberg Bay Country Club.

The Moolman Group Manager of Investments is not only a whiz at punching numbers at the family-owned property investment concern; he appears he is pretty handy with a set of golf clubs, too.

On a perfect scoring day, the 31-year-old Waterkloof resident put on an imperious display of golf, carding a nine-under-par 63 to open up a sizeable gap at the top of the leaderboard in the premier event.

Moolman racked up seven birdies and an albatross at the par-five fourth to better the previous course record, set by Sunshine Tour campaigner Jake Redman, by one shot.

“I’ve never set a course record before, so that was a pretty great way to start the week,” said the delighted former Sunshine Tour player. “I’ve always enjoyed playing on the Garden Route and I did pretty well down here as an amateur. I won the Southern Cape Open at Knysna Golf Club in 2004, and on another occasion I came second at Goose Valley.” 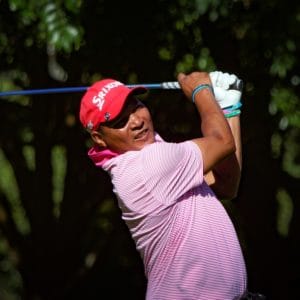 Ivan Williams from Southern Cape made five birdies over the last five holes at Plettenberg Bay Country Club to full within four shots of the first round leader Louis Moolman in the South African Mid-Amateur Championship; credit Pieter Els.

Local campaigner Ivan Williams also went on a birdie binge, carding five in a row from 14 to finish in second on five-under.

Moolman attributed his record-setting round to an early start and a hot putter.

“I’ve always been a bit volatile in the wind at the coast. I either play brilliantly or really bad. An early start and barely any wind to worry about meant I could fire at the pins. Who knows what would have happened it really blew this morning,” he said.”

The Cullinan golfer chipped in for birdie at the second before he holed out for two at the fourth hole.

“I very, very rarely chip in, so I took that birdie at the second as a good omen. I bombed a driver down the fourth fairway, about 60 yards past my playing partners. I had 219 yards to the hole and I went with my go-to club – my trusty 5-iron – because I hit that club much better than my wedges.

“I put a bit of strength behind the shot, because the hole was into the wind, but I still thought it might come up a bit short. We couldn’t see where it was going, because the hole played into the sun, but then we heard some guys shouting that it was in. It pitched about a metre and a half before the flag and rolled in. That really set the tone for the round.”

Moolman made three birdies in a row from eight and added another brace of gains at 12 and 13.

“At 12, I hit a wedge to three metres and a 6-iron to two metres at 13. I felt the pressure a little going down the last five holes and I started playing a bit defensively.

“I managed to save par at 15 after chipping it over the green, but I dropped a shot at 16 when I three-putted from the fringe. The last hole was playing right into the wind and it’s uphill, so I was pretty happy to walk off with a two-putt birdie.”

Moolman knows he will have a target on his back going into the second round.

“It’s a great start, but there are still three rounds left,” he said. “The forecast calls for pretty windy conditions on Wednesday. Ivan Williams took a while to warm up, but he fired five birdies down the last five holes to close the gap. He has a lot of skills in the wind, and so has Cameron. I’ll have to keep my head in the game if I want to stay in front.”