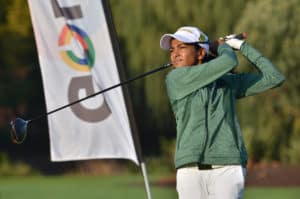 6 August 2019 – Don’t be fooled by her small frame, because pint-sized Kaiyuree Moodley packs a huge punch and her lethal ball-striking, pin-seeking approaches and putting prowess has put the rising golf star in the running for two national women’s sports awards.

The GolfRSA Elite Squad member is a finalist in two categories – Emerging Athlete and School Sport Star – in the annual gsport awards, honouring women in sport in South Africa.

The online initiative, launched by renowned cricket presenter and commentator Kass Naidoo, is geared at raising the profile of South African women sportswomen and gaining sponsorship from corporate South Africa to grow women’s sport in the country.

Proud as she, the awards poses a huge headache for Moodley and right now she is on a mission to finding a dress befitting the glittering gathering that draws the who’s who in sport and entertainment, taking place on 31 August.

“I am so proud to be a finalist alongside so many of South Africa’s top sportswomen. It’s a huge honour because I am not representing just myself, but also GolfRSA, Womens Golf South Africa and all the girls who play the game in South Africa. You won’t find many dresses among the golf gear in my closet, so I guess we are going shopping,” joked the diminutive Bryanston golfer.

Moodley is much loved for her upbeat personality and acute sense of humour, but when it comes to golf, her fighting spirit and competitive nature takes precedence.

The Crawford College Lonehill grade 12 learner took up the game at the age of four.

She began competing on the SA Kids Golf circuit and, between 2010 and 2015, she racked up top five finishes in each age division at the US Kids European Championships in Scotland and sealed a top six finish in the 2015 US Kids World Teen Championship at Pinehurst.

At home, she also made her presence known on the local junior circuit.

She represented Gauteng in the SA Women’s Inter-Provincial since 2015 and has been a member of the Lions teams in the WGSA 72-Hole Teams Championship since 2016.

In 2018, the Bryanston golfer earned national Junior colours in 2018 when she starred alongside Cole Stevens in the South African team at the Youth Olympics in Argentina and at the end of season, she made her senior debut in the IGU All-India Ladies Amateur Championship.

Her bid to make it two in a row for South Africa was thwarted by top ranked Indian golfer Jahanvi Bakshi, who won 2-up in a tightly-fought semi-final at the Tollygunge Club.

Moodley kicked off the 2019 season with a superb runner-up finish in the prestigious Annika Invitational USA at the World Golf Village Resort.

The South African upstaged the cream of US junior golf to lead the field with rounds of 72 and 68 at the Slammer and Squire course and a final round 74 landed her in a tie for the lead on two-under-par 214. She lost to Sweden’s Ingrid Lindblad at the first play-off hole.

“If someone had told me last week that I would get this far in the Annika Invitational USA, I would have thought they were crazy. I would have been happy with a top 20 finish. It was a good overall result for me. I held on to the lead until the very end, before losing in the play-off and I took so many positives out of that week.

“I shot the lowest round of the tournament. I tied for second in my first ever Annika Invitational and first-ever American Junior Golf Association event. I played with some of the best juniors in the world and I made lots of friends. I had a couple of chats with Annika Sorenstam along the way and I proudly flew the South African flag. So, despite not winning, there were loads to be proud of and to build on in the future.”

Taking her new-found confidence to the All-Africa Junior Golf Challenge in Botswana in April, she aided the GolfRSA Junior Proteas team to a third successive victory and finished second overall in the individual competition at Phakalane Golf Resort.

Another strong performance in the Toyota Junior Golf World Cup in Japan in June helped the SA Girls Team to sixth overall at Chukyo Golf Club.

Despite playing a limited schedule due to academic pressure this year, Moodley has maintained a top five ranking in the Open Amateur standings, backing up victory in the Western Province Women’s Amateur Championship with five top fives on the provincial circuit.

“It is tough to balance the academics with golf at the moment, because I am taking up a golf scholarship at the University of South Carolina next year and obviously, I want to score well on the final exams,” Moodley said.

“You have to try to get the balance right between playing golf and academics, and it’s not always easy. Unfortunately I will have to miss out on the Astor Trophy, which is disappointing, but that is one of the tough choices I’ve had to make. Luckily but I have tremendous support from my family and Womens Golf South Africa.”

Moodley is a finalist in the Emerging Athlete category alongside South African hurdles champions Zeney van der Walt and Rogail Joseph, while squash star Awande Malinga and chess player Minentle Miya are her co-finalists in the School Sport Star category.

GolfRSA media liaison Lali Stander won the first Women in Sport and PR award last year and is a finalist in the same category this year alongside Marisa Calvert and Keabetswe Taele.

Voting for the gsport awards close on 12 August. To cast your votes for South Africa’s rising star Kayiuree Moodley and Lali Stander, register at https://gsport.co.za/voting/.