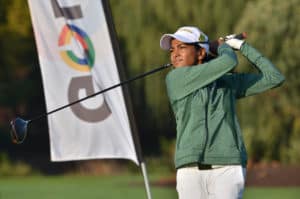 CAPE TOWN, 15 January 2020 – Kaiyuree Moodley has set her sights on the SA Women’s Amateur double crown in February and she hopes to gain masses of experience in the 2020 Major Champions Invitational in the United States later this month.

An impressive runner-up finish in the prestigious ANNIKA Invitational USA at the World Golf Village put the South African Youth Olympian on the global radar.

It also earned the slender Bryanston golfer a sough-after invitation from World Golf Hall of Famer and 10-time Major winner Annika Sörenstam to join Team Annika in Arizona from 25-30 January.

Six-time Major champion Sir Nick Faldo launched his popular Faldo Series in 1996 and after he brought the series to South Africa in 2018, the Major Champions Invitational followed.

The international team event features a global line-up of 72 junior golfers from 18 countries, gathered under the banners of 18 Major Champions for three days of competition. The Major Champions serve as captains and hand-pick their own teams of four elite golfers, who will compete for individual Girls and Boys titles, as well as the team title based on combined totals.

This year’s edition will be contested at Lookout Mountain Golf Club in Phoenix.

“We are leaving for the United States next week and I am super-excited; I just know that it will be a life -changing experience,” gushed Moodley, who will be taking up a golf scholarship at the University of South Carolina in August.

“I gained so much experience competing in the ANNIKA Invitational USA and I was over the moon when the ANNIKA Foundation invited me to represent Team Annika. The competition will be intense, but in the evenings all the juniors will dine together so we can get to know each other off the course.

“Sir Nick Faldo will also be hosting a clinic for us and after our event wraps up, we have been invited to attend the day one action of the Phoenix Waste Management PGA at TPC Scottsdale.

“It is such a privilege to be selected for this honour and I am super excited to have this opportunity. Every chance you get to compete internationally against the cream of junior golf is a chance to learn, to grow and to improve and I can’t wait to get started.”

The Seve Ballesteros Foundation is supporting a team representing the great Spaniard, while Southern Company will have a team in honour of the late Payne Stewart.

“We’re all trying to do our bit for junior golf, and we’ve given them this tournament, which as we all know is the most important way to learn this game. The only way you find out who you are and where your game is, is by competing,” Faldo said.

“The Major champions are given free rein to select their squads and these could be their contemporaries for the next 20 or 30 years as they go forward.”

For Moodley, the invitation couldn’t have come at a better time with the AON SA Women’s Amateur Stroke Play and Match Play Championships scheduled for Royal Johannesburg and Kensington Golf Club from 16 – 21 February.

“The timing really is perfect,” said the 18-year-old Gauteng golfer.

“Golf had to take a back seat to academics as I sat matric last year. I have been working incredibly hard to get ready for our premier events here at home, but this opportunity to compete against the world’s top juniors will really help to take my game to a higher level.”