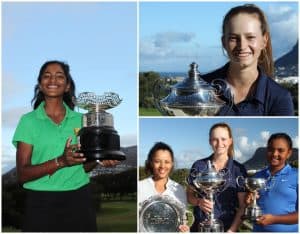 Bryanston’s Moodley was third after an opening one-over 73 and four shots behind first round leader Symone Henriques from Glendvista Country Club.

The Gauteng golfer played herself into contention with an eagle two at the par four second.

She fired a trio of birdies at the fifth, 15th and 16th holes to close with a three-under 69 that earned her a share of the lead on two-under 142 with fellow GolfRSA Elite Squad member enriques, who returned a final round 73.

In the ensuing sudden-death play-off, Moodley clinched victory with a birdie to lift the Edith Bowie Trophy.

South Africa’s top ranked Open Amateur Caitlyn Macnab finished in third on 146 with successive rounds of 73, while Mistry was a further shot adrift in fourth after rounds of 74 and 73.

Local favourite and defending champion Kaylah Williams – coming off her triumph in the Nomads SA Girls Championships at Langebaan – finished in a tie for eighth on 152 with rounds of 77 and 75.

Parow’s Janet Hayes and Steenberg’s Michelle Godfrey shared the Wilkinson Trophy after tying on scores of 97 in the Bronze Division.

Swanepoel holed a clutch putt for par on the 18th green to defeat Mistry from Randpark 1-up for the match play championship honours.

Danielle Bekker from Zimbabwe knocked out Bobbi Brown 4 & 3 in the Championship Flight, while Christan Booysen from Rondebosch claimed the Cecile Shaw Trophy when she downed Jemma Louw 2 & 1 in the Silver Division. Chen defeated Gill Davies from Clovelly for third place.

The Standley Cup went to Jaden Visagie from King David Mowbray Golf Club, who mowed down Anne Lloyd from Steenberg 6 & 5 to win the Bronze Division.