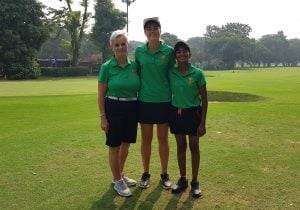 KOLKATA, India (1 December 2018) – Kaiyuree Moodley’s bid to make it two in a row for South Africa in the IGU All-India Ladies Amateur Championship was thwarted by top ranked Indian golfer Jahanvi Bakshi, who beat the Gauteng rising star 2-up in a tightly-fought semi-final at the Tollygunge Club golf course on Saturday.

Having come through the 36-hole seeding qualifier with a joint 11th place finish, 17-year-old Moodley knocked out Hunar Mittal from Haryana 4 & 2 in round one and defeated Bakshi’s younger sister Hitashee 1-up in the second round.

She put friendship aside to knock out compatriot Kaylah Williams 4 & 2 in the quarter-finals, but knew she was in for a tough day at the office against Bakshi, who was the runner-up in the qualifier and took some big scalps to reach the semi-final.

“Kai teed off with great determination,” said South African Womens Golf President Sally Greasley. “She just missed out on a birdie on the first hole and they halved the second. Both players hit great drives and approaches into the third green, but Kai sunk a lovely putt for birdie to go 1-up. 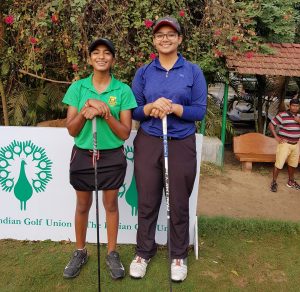 “They halved the fourth, fifth and sixth holes in pars and at the seventh hole, Jahanvi’s second shot finished in the trees. She punched out into the bunker and left her trap shot in the fringe. Kai was on the green in three and although she missed her first putt, the second was conceded and she led 2-up. They halved the eighth, but Jahanvi made a great birdie at nine to take one shot back.

“She also birdied 10 to square the match and matched Kai’s birdie at 11 to halve. It was her third birdie in a row, and this appeared to unsettle Kai. She missed a put on 13 and the Indian golfer went 1-up. They halved 14 and 15, but unfortunately Kai’s ball plugged in the bunker on 16. She couldn’t get a good shot out for an up-and-down to save par and went 2-down.

“Kai’s second on 17 after a good drive also finished in the bunker. This time, despite a great trap shot, she failed to box her birdie putt. That left Jahanvi with two putts to win. She lagged it close and tapped in for victory.”

Bakshi will play the stroke play qualifier Anika Varma for the title.

Greasley said Moodley was understandably disappointed, but will focus on the big picture.

“I know Kai will take the best out of this experience and from the lessons learned from representing South Africa at the Youth Olympics and use those to her benefit when she makes her next international appearance at the Annika Invitational USA early next year,” said Greasley.

“Kai and Kaylah both represented South Africa with pride and dignity and made me very proud. They were exemplary ambassadors at all times.

“The Indian Golf Union’s organisation of the event was absolutely has been superb. We were accommodated in the lovely Park Hotel in Kolkata, about a 30 minute drive from the course. We had a dedicated minder, Mr Suhbodip and his driver, who negotiated the chaotic traffic with ease, much to our amusement. Tollygunge is a very old member’s club, but the staff and tournament officials were extremely gracious and hospitable.

“We are extremely grateful to the Indian Golf Union for their very generous invitation and hospitality, and we look forward to bringing the next wave of rising stars to India next year.”