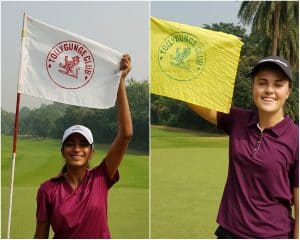 The event was formerly known as the All India Ladies Amateur Championship and won last year by South Africa’s Danielle du Toit at the Eagleton Golf Resort in Bangalore.

GolfRSA B-Squad member Moodley has enjoyed a steady rise to number four in the Open Amateur rankings this year. The 17-year-old Bryanston golfer trended towards a breakthrough with runner-up finishes in the Eastern Province Championship and the seeding round for the Sanlam SA Women’s Amateur and a third place finish in the KwaZulu-Natal Championship.

Moodley captured her first title on the Open Amateur circuit when she defeated Williams in a play-off in the Southern Cape Open and a month later, she bested Williams again to collect her second trophy in the Boland Open.

Moodley represented South Africa at the Youth Olympics in Argentina in October, where she tied for 22nd in the Girls Competition and claimed a joint 22nd place finish with fellow Gauteng golfer Cole Stevens in the Team Competition.

“I’m really excited to have another opportunity to play in a big international event,” Moodley said.

“The Youth Olympics was incredibly special and I can’t quantify the amount of experience I gained from the experience. I am especially glad that I get to play in India with Kaylah. We are great friends and we will definitely spur each other on.”

Williams has had an equally impressive run this year, The GolfRSA Elite Squad player won the Western Province Women’s Amateur and in 10 starts, racked up four runner-up finishes and placed in the top five four times. The 16-year-old Bellville golfer, who tied for 27th in her international debut in the Junior Open Championship in July, also topped the Individual Leaderboard in the SA Women’s Inter-Provincial at Devonvale in October.

“I am incredibly grateful to Womens Golf South Africa and GolfRSA to compete here in India at the end of the season,” said Williams.

“Each time you tee it up in an international event, it takes you out of your comfort zone and pits you against top golfers from all over the world. The learning curve is enormous and I am sure Kai and I will benefit hugely from this week’s experience.”

The GolfRSA pair will start the 36-hole seeding qualifier at the Tollygunge Golf Club on Tuesday and compete in the match play stage thereafter.