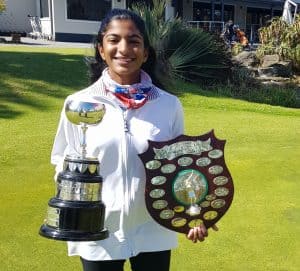 Gauteng junior Kaiyuree Moodley will represent South Africa in the golf sporting code at the 2018 Youth Olympics in Buenos Aires, Argentina from 6-18 October.

2 September 2018 – GolfRSA is proud to announce that Gauteng juniors Kaiyuree Moodley and Cole Stevens were named by the South African Sports Confederation and Olympic Committee (SASCOC) to the South African Team heading to Argentina in October for the third Youth Olympic Games.

Team South Africa will be represented in 19 different sports codes in Buenos Aires from 6-18 October.

Former Nomads SA Girls Rose Bowl champion Moodley had been trending towards victory with three runner-up finishes and a fistful of top five results this season.

She broke through for her first provincial success in the Southern Cape Open at the end of August, beating Junior Open debutant Kaylah Williams in gale force conditions at Knysna Golf Club.
The victory that propelled the Bryanston golfer to second in the Junior and fourth in the Open Amateur rankings. 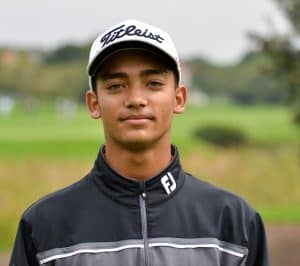 Gauteng junior Cole Stevens will represent South Africa in the golf sporting code at the 2018 Youth Olympics in Buenos Aires, Argentina from 6-18 October.

Stevens was also Central Gauteng’s top scorer in the 2018 SA Challenge Cup in May and helped Curro Aurora to back-to-back victories in the eighth South African High School Championship with a wire-to-wire victory in August.

“The Youth Olympics is a fantastic development opportunity for the world’s most promising young athletes and for Kaiyuree and Cole, the chance to test themselves against the world’s best young golfers.

“We are also excited to be sending GolfRSA Elite Squad member and South Africa’s number three ranked Zethu Myeki along as the team manager. This is a wonderful opportunity for all three golfers to experience a multi-sport games environment, while exposing them to learning and cultural opportunities.”

Womens Golf South Africa President Sally Greasley added:  We are extremely proud to have Kaiyuree representing South Africa at the 2018 Youth Olympic Games.   She has had an exceptional year and as a member of our Elite Squad, truly deserves her selection. This will be an incredible experience for them both, and as this opportunity only comes once every four years, their selection is a very special honour.  We wish both Kaiyuree and Cole the very best of luck in Buenos Aires.