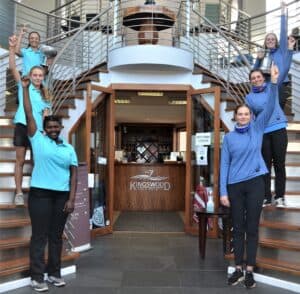 The Western Province trio was simply superior as they marched to victory in the Swiss Team Trophy, producing three of the lowest scores over the four rounds of the stroke play team tournament.

Van Rooyen set the pace with an opening three-under-par 69, Williams produced a five-under 67 in the third round and Brown fired a blistering seven-under 65 on the final day. The team combined for rounds of 142, 146, 137 and 136 to triumph on a winning total of 561.

Williams, who is heading to the USA next month to begin her collegiate career at Florida State University, could not have imagined a more perfect swansong in her final appearance on the GolfRSA amateur circuit as she guided the team to a 17-shot victory.

“We came to win, and we were determined to pull it through,” said the 19-year-old Durbanville golfer. 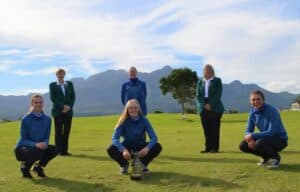 “The last time Western Province won the Swiss Team Trophy was in 2003 when Gilly Tebbutt, Joanne Lefson and Wendy Warrington did it at East London Golf Club.

“We really wanted to break the drought and we were bitterly disappointed when GolfRSA had to cancel last year’s WGSA 72-Hole due to the Covid-19 pandemic. From the moment we heard it was going ahead this year, winning became a huge goal for us.”

Williams said the secret to their success was their unity as a team and their unwavering belief that they could win.

“We really worked hard to prepare for the week, and we approached every round with the intention to leave it all out there on the course, knowing that if you are struggling, your team-mates will have your back,” Williams said.

“We came to Kingswood with a winning mind-set, and we kept motivating each other throughout the tournament. I am incredibly proud of the team and our achievement.” 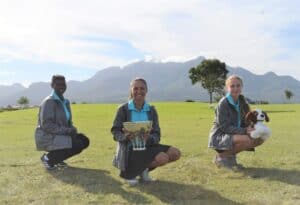 Border captain Flanagan said the trio stuck to a simple strategy to claim victory in the Challenge Trophy.

“I knew coming into the week that it would be tough,” said Flanagan. “Kingswood is a very challenging course, especially when the wind is up, and it’s a lot longer than the courses we play back home.

“It was also the first time that Kesha and Lisakhanya would be tested at national level. I’ve played for Border on many occasions, and I know just how intimidating it can be to put that provincial jacket on for the first time. My advice to both was to forget about the scores. I told them to only focus on one hole at a time and I am really proud of the way they handled themselves.”

“We were really tested in the wind and we all just did the best we could. KwaZulu-Natal B really put us under pressure in the last two rounds, but we kept our focus and composure and we pulled it through. I am really excited to see how we will measure up in the A-Division next year,” Flanagan said.

Olivia Wood, Amy Fletcher and Kamaya Moodliar secured second for KwaZulu-Natal B with a total score of 623, finishing just one shot ahead of Western Province C’s Zara Le Keur and sisters Anita and Erica Chen. 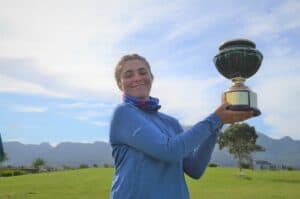 Reigning 2021 Nomads SA Girls Rose Bowl champion Van Rooyen, a 2021 inductee to the GolfRSA National B-Squad, fired rounds of 69, 74, 70 and 71 to win the Individual Competition with a winning total of four-under-par 284.

Brown, who lifted the Western Province Women’s Stroke Play Championship title earlier this year, finished a close second on 285 with rounds of 73, 72, 75 and 65.

“One of the most exciting aspects of this year’s tournament was that nearly half the field featured new caps earning provincial Union selection. This underscores the strength of the Development Programme that continues to grow across the country,” Braude said.

“Some of our rising young squad stars make a fantastic debut and we were excited to see 14-year-old Kesha Louw, a member of the National Squad Talent Identification (TID) Squad, and 15-year-old South African Golf Development Board member Lisakhanye Payiya celebrate their first start in the victorious Border team.

“We were also delighted to see some of our leading Mid-Amateurs players on our rankings in action, including Bongi Shabalala who earned her first provincial cap in the Gauteng North B team, former SA Mid-Amateur champions Liezl Smit (KwaZulu-Natal A) and Vanessa Smith (Boland), Heidi van der Berg (Gauteng North), and Sonja Bland, representing Southern Cape.