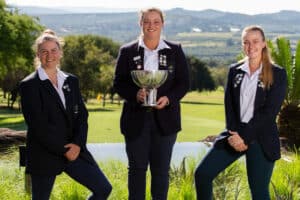 31 May 2022 – GolfRSA’s No. 1-ranked amateur Gabbi Venter led Free State to a historic promotion in the 2022 GolfRSA 72-Hole Teams Championship in Mbombela in May.

Venter said the secret to their success was their unity as a team and their unwavering belief that they could win.

“We really worked hard to prepare for the week, and we approached every round with the intention to leave it all out there on the course,” said the 18-year-old Bloenfontein golfer.

“We knew coming into the week that it would be tough. The course is very challenging and there’s a lot of trouble areas off the tees, so positioning was key to our strategy. We kept it very simple – keep it in play as much as possible and to give ourselves changes to score.

“I am incredibly proud of our achievement and especially of the way Ellandri and Cheré handled the pressure, especially on the final day with 36 holes to play. A lot of work went into this victory, not only from our side. The support from our union, our president Sarita Sadler and our manager Louise Hattingh was incredible. This is their victory just as much as it is ours.” 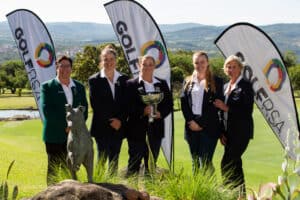 Venter has represented Free State for a number of years in national team events, but it was only a second appearance in this tournament for 14-year-old Van Heerden. And the first time Myburgh – a Forensic Accountant at PwC in Bloemfontein – was tested at national level.

“The team definitely came to this year’s tournament with a winning mind-set, and they kept each other motivated throughout the week,” said Free State president Sarita Sadler.

“It was a big week for Ellandri and Cheré, and there was a lot of pressure on Gabbi as the country’s number one player, but they all came through like champions. They stuck to approaching every round one hole at a time, and I couldn’t be prouder of the way the players handled themselves. We are all extremely excited to make our A-Division debut next year for the first time ever in this tournament.

“Congratulations to Mpumalanga Golf Union for all their arrangements and hosting an incredibly memorable tournament, and a big thank you to Mbombela CEO Darren Plumb and all the staff for the immaculate course and legendary hospitality. It truly was a week the Free State team will treasure forever.”

The country’s top ranked amateur lived up to her billing with a fourth-place finish in the Individual Competition, firing rounds of 71, 78, 74 and 72.

“We are incredibly proud of Gabbi’s achievements,” Sadler said. “She is one of the most hardworking golfers I’ve ever known, and it is wonderful that GolfRSA and Womens Golf South Africa acknowledged her achievements in this way. This will serve as a huge inspiration for the young talent in Free State coming through the ranks.”

Meanwhile Central Gauteng A also had a positive week in Mbombela, returning to the winner’s circle for the first time in six years with a 19-stroke victory in the Swiss Team Trophy.