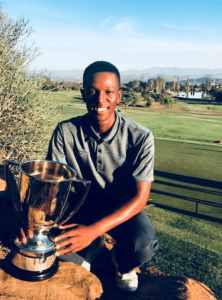 Buoyed by a new set of clubs, Karabo Mokoena eagled the final hole to claim his first open amateur title, the Boland Amateur Stroke Play Championship, by a stroke.

The 20-year-old member had been contemplating take a break from the game following a series of disappointing results, but the arrival of a new set of tools provided the inspiration that the Ernie Els & Fancourt Foundation member needed.

“I only got my new Srixon clubs two weeks before the tournament,” Mokoena explained. “I was expecting to take a while to get used to them, and although I struggled a bit to adjust to the driver, I found that I was hitting my new long irons and wedges so much better.”

Mokoena got a hint of things to come on the very first hole of the Boland Amateur, played at Worcester Golf Club.

“I pulled my drive onto the wrong fairway, but had a clear shot in,” he explained. “Then I hit my 5-iron to five feet and boxed the putt, so that gave me a lot of confidence.”

He closed the day’s play with a score of 69 and a share of the lead.

“It made such a difference having options off the tee,” he said. “It’s not a long course, so I barely pulled out my driver; instead I just kept myself in play with my long irons.”

A second round of 69 saw Mokoena hold his position at the top of the leaderboard, alongside local favourite Hennie O’Kennedy and just one shot ahead of recently-crowned Nomads SA Boys U19 champion Keegan Mclachlan.

“I was surprised to still be in the lead,” Mokoena explained. “Because I really thought the long hitters like Christo (Lamprecht), Keegan and Deon (Germishuys) were going to chew the course up.

“I was quite nervous standing on the first tee [in the final round], but that opening tee shot is quite open, so I just took a deep breath and played my shot.

“Then I drove into a bush on the second hole and made double bogey, and suddenly I was three shots back. In a weird way that actually calmed my nerves down and I was able to play normally.”

Mokoena was still three behind O’Kennedy at the turn and, with three holes to play, felt like his chance of claiming a maiden open amateur title had gone as he trailed the Stellenbosch golfer by three strokes.

“I made a birdie on the 16th and then I holed my bunker shot on the 17th for another birdie, while Hennie missed a short birdie chance,” said Mokoena.

“Coming down the 18th, which is a short par five, I saw Keegan tapping in up ahead and assumed he had made a birdie, so I would need to make an eagle just to make a playoff.

“I hit a 9-iron to about 15 feet and then I found out that Keegan had made par. Hennie three-putted the last and suddenly I had this putt to win. But I didn’t want to be too aggressive and miss my chance of making the playoff.

There was no need for a playoff, however, as Mokoena sank the eagle putt.

“I let out the loudest scream I have ever made when it went in,” he laughed. “I means so much to get the win – the last one was when I was a junior, probably five years ago.

“I have been working so hard and nothing was going well, so it feels great that everything is coming together now. My confidence is sky high.”

“They have invested so much in me that it would be shame if I didn’t make it,” Mokoena explains. “I want to show my gratitude for all they have done for me by doing well for the rest of the year. So I’m going to keep working hard and try to continue this good spell.

“Long term, I’d like to turn professional and take on the world.”