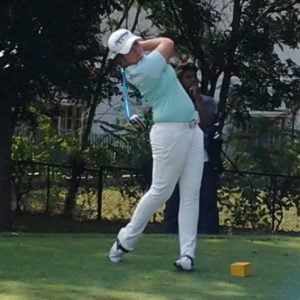 Danielle du Toit in action during the 1st round of the Indian Golf Union’s All India Ladies Amateur Championship in Bangalore, India

19 December 2017 – It was an up-and-down start for Danielle du Toit and Zethu Myeki, but both players were positive after the opening round of the Indian Golf Union’s All India Ladies Amateur Championship in Bangalore, India on Tuesday.

“The Eagleton Golf Resort course is 6,201 yards long (5,670 metres), and what it lacks in length, it makes up for in degree of difficulty,” said Womens Golf South Africa president Sally Greasley.

“Driver off the tee is not the first option on many holes, with some very narrow landing spots and very undulating greens. Danielle opened with a three-over-par 75 and Zethu battled an ice-cold putter to an opening nine-over 81.

“Both girls feel they can do better in the second round. The leader is Nayanika Sanga from India and she set the target at even-par 72. Danielle is joint seventh and in a good position, but Zethu must get on the birdie train is she hopes to make the top 32 to compete in the match play stage.”

Both players launched their campaign at the 10th tee.

Du Toit three-putted from 10-feet to open with a bogey, but birdied at 15 to level the score. Her tee shot at 16 disappeared in the bush, which led to a double bogey and she dropped another two shots when she three-putted the par-three 17th.

“Danielle was four-over at the turn, but she birdied the first and fired eight straight pars coming home,” said Greasley. “She found her rhythm on her back-nine and was pleased with her effort, considering her limited schedule this season.”

After a strenuous academic year sitting matric, Du Toit chased Myeki all the way to the finish line in the Mpumalanga Open in November and she was delighted that her form held up in India.

“I hit the ball solidly and good course management helped me to recover from a couple of wayward drives,” said the Pretoria Country Club golfer. “My local caddy is also very knowledgeable and he was a huge help, especially on these tricky greens. The pin positions were quite difficult and the greens are much slower than those at home. Patience was the name of the game.”

Myeki made a solid start with a great par at the first and birdie at the second and she parred the next two holes before dropping a shot at the fifth.

“Zethu also bogeyed six and from there her putter completely went AWOL,” Greasley said. “She three putted seven and bogeyed eight and nine to turn five over. She hit a great approach at 10 to set up a birdie and made the putt to move back to four over.

“After a great drive at 11, she chunked her second. She left herself a difficult chip to the green and couldn’t save par. At this point, the putter turned ice cold and she three-putted from nowhere on the short par three.”

Myeki dropped two more shots from the sand on the par-three fifth, but parred the next three holes before a poor chip at the ninth cost her another shot. She arrived in India buoyed by her victory in the Mpumalanga Open and third place overall in the Sunshine Ladies Tour Sun PinkStig Final and was left highly frustrated by the short stick.

“Zethu liked the course after our practice round and had great expectations, and I have to say, from my standpoint it was difficult watching her,” said Greasly. “She is normally so consistent on the greens, but give Zethu her due…she gave little away and at no point would I have known how her game was going had I not been watching.”

“I just couldn’t sink the putts,” said the Ernie Els and Fancourt Foundation member. “I gave them every chance and I never left them short, but so many lipped the hole and left me with that awkward length back. I hit eight greens in regulation on the front nine and yet I shot 41.

“Of course I’m disappointed, because putting is the strongest part of my game. But I worked on the putter after lunch and hopefully I found something that will help me sink some putts in the final round. It will require a low round, but I’m not out of the running yet.”