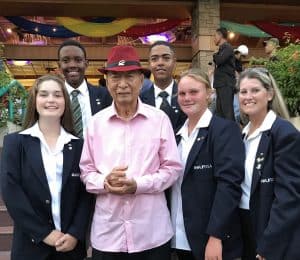 5 June 2018 – It wasn’t the start Rorisang Nkosi and Keyan Loubser were aiming for, but the South African Golf Development Board pair gained a lot of insight on day one of the Himbara World Junior Golf Championships, presented by Ciputra, in Jakarta, Indonesia.

Nkosi was lying second going down the back nine of the Pantal Indah Kapuk course at the Damai Indah Golf Club on Tuesday, but he paid the price of some wayward shots.

The North West amateur signed for a six-over-par 76. However, with 54 holes to play, Nkosi is still in a strong position. He finished seventh overall and is just four shots off the pace in the Boys D-Division in the 13-14 age group.

“The first thing that hit us this morning was the heat,” said the 13-year-old Pecanwood golfer. “It got hot really quickly and it was 35 degrees out there. With the thick cloud cover, it was like someone pulled a blanket over the course and the humidity was at 100 percent.

“The greens are very hard and really fast, but they are great to putt on. The fairways were soft and easy to play off, but this is strictly a percentage course. Most of the fairways are lined with palm trees, so if you are out of position, it’s really tough to make par.

“If you hit it offline, you are either hitting very high lob-shots or punching out. You need to be accurate off the tees and stay patient. I had six bogeys in a row from the fourth, but I made five pars in a row from 14, so lessons learned today.”

Loubser from Western Province had a tough day at the office in his international debut.

The Bellville golfer went around the championship course in 84 blows. He is 12 shots off the pace in the Boys A Division in the 15-18 age group and will need to keep it in play to move towards the leader at three-under-par 69.

“The greens are incredibly fast and hard and I found them quite challenging,” said Loubser. “The fairways are like carpets. Seriously, when you strike the ball, it’s like hitting it off a carpet.

“This is my first international event and it’s awesome to experience a course outside South Africa. Our caddies are ladies and I was shocked to see them covered up from head to toe. I can’t understand how they are not boiling, because it was really very hot out there. My caddie did a really great job, especially with those divots in the fairways.

“The opening ceremony was absolutely stunning. It paid to be the eldest in the group because I took great pride in carrying the South African flag. It was a very special occasion and we are really privileged to have this experience.”

Wednesday will see the start of the Girls Competitions, with Jordan Rothman and Kiera Floyd lining up for South Africa.

“The highlight so far was arriving in Indonesia and immediately experiencing the different culture,” said the 15-year-old Bellville golfer, who will tee it up in the Girls A-Division for 15 to 18-year-olds.

“The Indonesian people have a very respectful manner, and we have been treated like royalty from the moment we arrived. The course is beautiful. It’s not too tough, but placement and accuracy is key to this course. I think you have to guard against getting overwhelmed by this experience, so I am going to focus on my own game and try to forget about the other players.”

Floyd from Ebotse will compete in the Girls B-Division in the 13-14 age group.

“My strategy is to play shot for shot and to keep my head in the game and not to worry about the end result,” said 13-year-old Floyd.

“I’ve played internationally quite a lot, but this is the best international event I’ve been to. The flag raising ceremony was incredibly special. All the international competitors and teams were introduced and everyone wanted to take photos with us. They had some traditional ceremonies during the opening to honour their culture and that was very magical for all of us.”