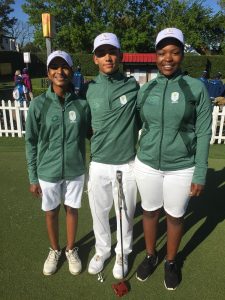 BUENOS AIRES, Argentina (11 October 2018) – GolfRSA National Squad player Cole Stevens made significant strides in the second round of the golf competition at the 2018 Youth Olympics in Buenos Aires on Wednesday.

Stevens was tied for 20th after an opening five-over-par 75 and six strokes behind the trio of juniors leading the 32-strong field in the Boys Competition at the start of the second round at Hurlingham Golf Club.

The 17-year-old Parkview golfer got off to a birdie start at the par-3 first, and added a further gain at the par-4 fifth. He closed with a two-over 72 that boosted him to joint 12th on seven-over 147.

“I boxed a 20-footer at the first to get my round off to a good start, but gave shots back at two and four,” said Stevens.

“At the fifth, I made a good up-and-down for birdie and from there it was a solid par game until I bogeyed 14 and 18. I was really happy to improve on the first round; my overall game, especially the putting and chipping, was way better in round two.”

World number 56 Karl Vilips from New Zealand leads the Boys Competition on 137 after carding rounds of 69 and 68. American Ashkay Bhatia is second on 138. 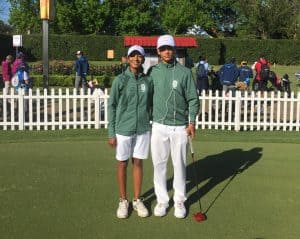 Team mate Kaiyuree Moodley tied for 20th with an opening 77 in the Girls Competition, but the 17-year-old Bryanston junior backpedalled to joint 24th on 158 after a second round 81.

“Kai really had a tough day at the office,” said team manager Zethu Myeki. “She bogeyed the first, but dropped on the second and had five more bogeys, but it was doubles at eight, 11 and 15 that really cost her.

“The course was set up quite tough and she is still struggling on the small, hard greens. She is positive, though, and really grateful for the exposure and all the experience she is gaining here this week. Kai is real fighter and she will try very hard to finish off the Girls Competition with her best effort.”

Reigning Australian junior champion Kim Grace carded rounds of 71 and 69 to grab a share of the lead on 140 with overnight leader Alessia Nobilo. The Italian opened with a 68 and returned a second round 72.

A total of 64 juniors (32 male and 32 female) started the 54-hole Boys and Girls Stroke Play Competitions, which concludes today. Thereafter, the countries will compete in the Teams Competition from 13-15 October.