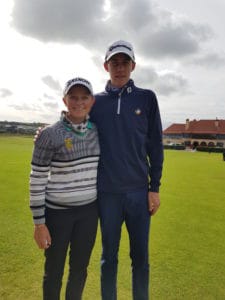 Caitlyn Macnab and Sam Simpson are flying the flag for South Africa in the prestigious Duke of York Young Champions at Royal Portrush in Northern Ireland; credit GolfRSA.

11 September 2019 – Sam Simpson needed every ounce of the experience he gained during the GolfRSA National Squad Tour to Great Britain and Ireland in June to finish in the top four on a tough first day of the Duke of York Younge Champions Trophy in Northern Ireland.

A late starting time on Tuesday at Royal Portrush Golf Club saw the Western Province junior and compatriot and playing partner Caitlyn Macnab tee off in high winds and rain at the exposed links layout on the rugged County Antrim coastline.

Simpson signed for a three-over-par 75 and joint fourth with Welsh junior Dylan Thomas.

The pair finished two shots adrift of English pair Callum Macfie and Conor Gough and Laurenz Kubin from Austria edged into third with a two-over-par 74.

“It is difficult to describe exactly how tough the conditions were, but even the locals were saying that it felt like Hurricane Dorian had hit the Irish coast with wind stronger than they have seen in years,” commented Womens Golf South Africa President Sally Greasley.

“Sam and Caitlyn both started off in fairly benign conditions, but by the time they reached the fourth tee it was pouring and the wind picked up speed. The conditions just became increasingly difficult as the day progressed and over the last nine holes, the players were battling a 4-club wind, which was straight into them over the closing holes.”

Greasley said the key to Simpson’s better scoring round was his golf course management.

“For the most part Sam was able to keep the ball in play, but the greens are very hard and any ball landing remotely near the green ran straight through,” she said. “He started well and turned one-under, but the back nine was more erratic and unfortunately he has some close misses for par.

“Caitlyn, on the other hand, really battled. The putter was stone cold and even her bread-and-butter chips and pitches eluded her on the day. She bogeyed the first, but made two good pars at the second and third, only to drop another shot at the fourth when her par-putt lipped the hole.

“She was five-over through the turn and pencilled an eight on her card at the par four 11th after her ball sailed through the wet rough. We couldn’t find her first ball and she was forced to play her provisional. She made good pars on the 12th and 13th holes, but her putting let her down on the closing stretch and she ended up signing for an 84.

“She was very disappointed with her round, but in reality she really did well to battle the conditions and the extremely thick and penalising rough in the wet weather. And the pin positions for the week are in the same spots as they were for The Open, so you can really imagine how tough the juniors had it on day one.”

Macfie had a couple of early birdies that helped to offset a bogey at eight and a pair of double bogeys at nine and 10. Gough overcame a double bogey at the second with three birdies on the bounce from the fifth hole, but dropped two further shots coming home.

Simpson mixed two birdies with five bogeys, four of which came on the back nine.

“The last nine holes were definitely much tougher to navigate in the brutal wind and rain,” said the reigning Nomads SA Boys U-19 Stroke Play champion, who cracked the nod for the International Team at the Junior Presidents Cup in December on Monday.

“My game plan this week to abuse my 2-iron because I’m hitting really straight and far and it helped me to make a nice par at the first that settled the nerves. I stuck to it and it worked out well. Avoiding the rough is really key and through 13 holes I was one-under and had made only one drop.

“I knew the closing stretch would be really tough, playing straight into the wind and I tried to keep the ball in play, but unfortunately the game just wasn’t there and I wasn’t able to cap off what had been a really solid round up to then. In terms of the conditions we faced, though, I felt that three-over was a good score. It is links golf and you just have to accept it, but I look forward to trying to capitalise on an early start today.”