BUENOS AIRES; Argentina (2 November 2017) – Malcolm Mitchell and Matt Saulez are targeting another winning performance for South Africa in Argentina over the next two weeks.

The KwaZulu-Natal pair departed for South America on the weekend and will kick off their two week campaign in the 21st edition of the Copa Juan Carlos Tailhade at the Los Lagartos Country Club in Pilar on Thursday. 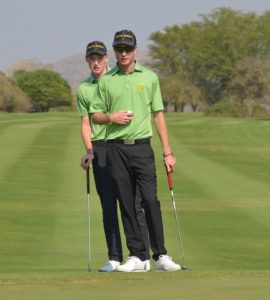 Matt Saulez (front) and Malcolm Mitchell (back) will represent SA in Argentina.

The teams will compete in the individual stroke play event, with their aggregate scores counting towards the team total in each of the four rounds. Australia tops the medal table with five victories, England has four titles and the Netherlands has won the team competition three times.

Mitchell and Saulez had their first look at the Los Lagartos layout in the official practice round on Wednesday and both players left the course feeling positive.

“Malcolm and I both like the look of the course,” said Saulez. “The fairways are tree lines with very good greens. We were both badly jetlagged after our arrival, but we are feeling much more relaxed and at home now. It’s been a great experience so far and we are very excited at what lies ahead over the next two weeks.”

Mitchell and Saulez will aim to extend South Africa’s fantastic record in the championship.

Following the prestigious international Teams event, it’s each man for himself in the 122nd Argentine Amateur Championship. The sixth oldest amateur championships in the world and the most highly rated in Latin will be hosted at the nearby Jockey Club from 16-19 November.

McClatchie went on to win the 36-hole stroke play qualifier in 2016 at the Stays Golf Club.