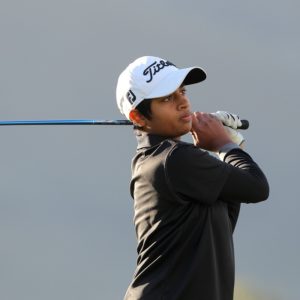 12 January 2018 – South Africa’s Kajal Mistry and Woo-Ju Son will fly the flag in the 10th Annika Invitational USA, presented by Rolex, in Florida from 13-15 January.

Mistry, the country’s top ranked senior, and the number one junior Son, have been drawn together for the opening round at the World Golf Village in St Augustine alongside Maria Jose Bohorquez from Bogota, Colombia.

“It’s wonderful to see Kajal and Woo-Ju feature in such a stellar line-up,” Greasley said. “The Annika Invitational USA has become one of the American Junior Golf Association’s premier events and we are extremely pleased that Kajal and Woo-Ju were afforded the opportunity to compete this year.

“We embrace every opportunity for our juniors to compete abroad, because you cannot put a prize on the experience they gain from testing themselves against top juniors.

“In addition to competing against cream of junior golf, Kajal and Woo-Ju will also get to meet and learn from Annika Sorenstam, who is arguably the most successful female golfer of all time.

“Annika is very involved in the event. She meets all the players at the welcome dinner and interacts with the juniors throughout the tournament. She will be hosting a clinic after their official practice round on Friday and she also presents some of the segments of the “More Than Golf” seminar, which covers nutrition, fitness, media relations, course management, as well as the college admission process.

“She is always at the 18th when the players walk off the course. I believe her personal touch goes a long way in instructing the juniors on etiquette, how to interact with sponsors, the importance of giving back to golf and setting an example for the young girls just starting in the game.

“In addition to attending the clinic and the seminar, all the players will also attend the Callaway Golf Junior Amateur Awards reception and a dinner hosted by the World Golf Hall of  Fame, honouring Arnold Palmer.”

Mistry and Son can expect strong opposition when the 54-hole event tees off at the Slammer and Squire Courses on Saturday.

The 2018 winner will receive an invitation to compete in the Florida’s Natural Charity Classic on the Symetra Tour, the development arm of the LPGA Tour.