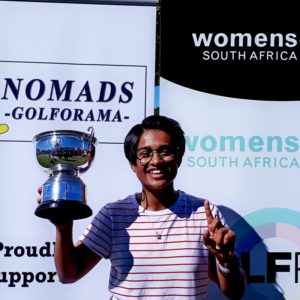 27 March 2018 – Kajal Mistry wrote the next chapter of her blossoming career when she won the Nomads SA Girls Rose Bowl Championship in wire-to-wire style on Tuesday.

In a show of sublime mental fortitude and composure, the 17-year-old Randpark junior was in a class of her own over 54 holes at Royal Cape Golf Club as she produced three well-constructed rounds to celebrate an uncontested eight-shot victory on 10-under-par 212.

As the age-old proverb goes, beware the sick golfer.

Mistry has been battling a chest cold for over the week, but the country’s top ranked golfer was a familiar figure at the top of the leaderboard as she struck early with a four-under-par 70 to pull one shot clear of local favourite Kaylah Williams.

Having stretched her lead over Williams to four strokes with a second round 72, Mistry set the tone for the final round when she stuck her approach at the first hole to three feet and boxed the birdie putt.

Gains at all three par fives took her to the turn at nine-under and she mixed three birdies with a pair of bogeys to bank her first title on home soil this season.

“I’m really pleased with my performance this week,” said the Gauteng golfer.

“It’s my matric year, so I’m playing a limited schedule this season and I have to make every start count to maintain my senior and junior rankings. I put myself in a good position on day one and I had a target of 12 under in mind for the tournament.

“I felt a four-under 70 in the final round was doable, because there was barely any wind. Unfortunately I dropped a couple of shots, but I managed to birdie four of the par fives and made a few more birdies to finish in double figures. That’s really satisfying.

“The ultimate goal this year is to maintain my number one spot in the senior rankings and to finish at the top of the junior rankings, so this was a big one for me. Obviously coming off a multiple-win season last year, I want to keep winning and improving and getting back into the winner’s circle this early in the season is a great start for me.

“I always want to improve and there is some fine-tuning to do, but overall I’m really happy with my form. I’ve got my title defence in the Sanlam South Africa Women’s Stroke Play coming up next month and there is the SA Girls in Orkney and the Sanlam SA Women’s Match Play still to come. I’m excited for the rest of the year.”

Big-hitting Kiera Floyd astounded the golfing fraternity when she beat the field at the East Course of Royal Johannesburg and Kensington to win the 13th event in the popular Bridge Fund Managers Junior Series last month.

The 13-year-old matched fellow Ekurhuleni golfer Caitlyn Macnab with rounds of 73 and 75 and started the final round tied with Macnab on level par.

Macnab moved into second with a birdie at the 11th, but Floyd finished birdie-birdie-par for a final round 72 to clinch second on two-under 220. Macnab parred her way home for a 73 and had to settle for third on 221.

Anika Smit edged out Isabella van Rooyen for glory in the B-Division.

The pair tied for the lead through two rounds, but Smit from Vryheid Golf Club closed out a one shot victory on 258 with a final round 85. Van Rooyen from Clovelly signed off with an 86. Lize-Mari Prinsloo from Mossel Bay Golf Club finished in third place on 268.

Danielle Foster from King David Mowbray Golf Club posted rounds of 38 and 32 to lift the C-Division title with 70 points.