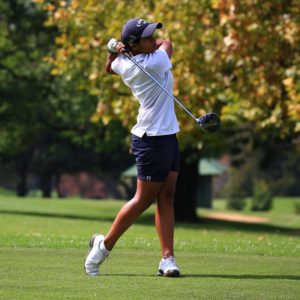 26 March 2018 – Kajal Mistry stuck to a well-laid game plan to open up a yawning lead at the 36-hole mark of the Nomads SA Girls Rose Bowl Championship on Monday.

The country’s top ranked amateur made the most of an early start in balmy conditions to fire a superb four-under-par 70 and kept her mistakes to a minimum in the gusting wind in the afternoon to keep her hopes of a wire-to-wire victory alive with a round of 70.

“There are six par fives on this course, so if you can hit fairways, you can set yourself up to score,” said the 17-year-old Randpark golfer, who leads by four shots on six-under 142.

“I managed to birdie four of the par fives in round one and three more in the second round and that definitely helped my score. The wind really starting gusting around the sixth hole and it made club selection very tricky, especially down the back nine.”

Mistry is cutting back on her national schedule to accommodate a larger academic workload this year, but she shined for South Africa during the country’s recent title defence at the All-Africa Junior Golf Challenge in Morocco.

The top scorer for the SA Girls Team, she took the top prize for a second successive year in the Girls Individual Competition and brought that confidence to Cape Town.

“I felt pretty confident in my game coming here,” said Mistry. “It’s a great advantage knowing the course and it’s in much better shape than I expected. The greens are absolutely amazing. They are very smooth and run very true.

“It’s not a long course, but you have to be tactical, because you can easily mess up from the tee. I did that three times and paid the price. I had a five shot lead going into the final round of the Sanlam SA Women’s Stroke Play last year and ended up really having to fight for the title, so no expectations this time. I’ll just play the course and stick to the game plan.”

Errant tee shots and a frosty putter nearly proved the undoing of the pre-tournament favourite, but she grinded out rounds of 71 and 75 to finish alone in second on two-under.

“I played really nicely in the first round and made a couple of really good putts, but the putter just went cold on me during the second round,” said the 15-year-old Bellville golfer. “I just want to continue to stay patient and to push myself.

“I came from five shots back to win the Ackerman Championship last year and again last week in the Western Province Amateur, so I know it can be done. You can get aggressive around this course, especially on the par fives, but you have to keep it play.”