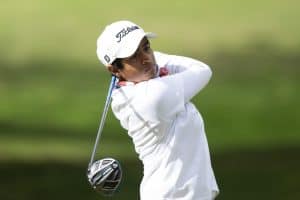 27 April 2019 – Kajal Mistry hopes third times the charm when she lines up on Sunday in the South African Women’s Amateur Championships at Woodhill Residential Estate and Country Club.

Mistry is heading to the United States in August, but before she takes up a golf scholarship at the University of Arkansas in August, the GolfRSA Elite Squad member has one more box to tick.

Eighteen-year-old Mistry claimed the biggest title of her amateur career when she lifted the SA Women’s Amateur Stroke Play Championship trophy at the Wanderers Golf Club in 2017, but winning the coveted double has proven elusive in the last two years.

“I would love to leave South Africa on a high note, but if the last two years have shown me anything, I’ll really have to work for it,” said the Randpark golfer.

In 2017, Mistry lost to Jordan Rothman from Western Province in the second round. A year later, she reached the top 16 but lost at the 21st to former Stroke Play champion Kaleigh Telfer.

Telfer reached the final, but was denied the double by Rothman, who won the final at Umhlali Country Club 2-up to become the second youngest winner of the flagship event after Ashleigh Buhai.

Rothman is a firm favourite for the double, coming off a strong summer that included a victory in the highly acclaimed SA Junior International in March, but Mistry also made a strong case for success with a blistering run on the recent Sunshine Ladies Tour.

In seven starts on the women’s professional circuit, the Ernie Els and Fancourt Foundation member enjoyed two runner-up finishes and three top 10s and finished fourth overall on the final Investec Property Fund Order of Merit at the end of the season.

“The experience of competing against the pros will definitely help my course management and mental game at Woodhill,” said Mistry.

“That will be important, because the stroke play results will determine the seeding for the Match Play Championship. After that, anything can happen. Traditionally the top ranked players dominate the stroke play stage, but the match play stage is wide open. And it’s going to be a really long week.”

The two flagship events of South African women’s amateur golf will be played back-to-back from 28 April to 3 May for the first time since 2012.

“The upside is that you can play yourself into really good form over the week,” Mistry said.

“The downside is that Woodhill is up-and-down with a lot of hills and valleys and it will really test your resolve. Stamina, especially over the 36 holes during the first two days of the match play stage, will be a key factor.”
Having only played the course once a few years ago, Mistry followed the country’s leading juniors during the Nomads SA Boys Under-19 Championship in February. “I watched the guys to see how they managed the course and I also caddied for my former Gauteng team-mate Symone Henriques during the Gauteng North Girls Junior Championship earlier this year, so I had a good sense of the challenges,” Mistry said.

“I played the course for the first time last week and I like the layout. It’s tree-lined, but not nearly as penal as say Westlake or Royal Cape. The fairways are reasonably generous and the course is in great condition. It’s not playing that long, but position off the tees will be key to going low.

“I’m really happy that Reece Hackney will be caddying for me over the first two days. He was on my bag when I won at Wanderers, too. He’ll make sure that I’m having fun, and don’t get too serious, too soon, especially over the first five holes, which are all uphill!

“I’ve been working really hard with my coach Darren Witter on fine-tuning my game. To have your name on both trophies is the highest honour and achievement for any amateur and not too many have done it.

“Match play is such an unpredictable format. You can be playing your best golf and make a bunch of birdies and lose or you can win just on pars. Just last month I was beaten by Annelie Swanepoel in the Western Province Women’s Amateur Match Play final. She’s 10th on the Junior Rankings, so it just goes to show that in match play, you can never be certain.

“I would really love to own the double, but I’ll park my expectations once the stroke play stage gets underway, and take it hole by hole, shot for shot. I am striking the ball well and my short game is very good. If the putts start dropping, I’m in with a chance.”

NOTE
The SA Women’s Stroke Play and Match Play Championships were played back-to-back at the same venue from 1969 until the two championships were split in 2012.
Only seven women have claimed the calendar double in the two premier events, including Mandy Adamson (1992), Sanet Marais (1994), Tanica van As (2003), Cas Bridge (2001), Welch player Breanne Loucks (2008) and Kim Williams (2010), while two-time Ladies European Tour champion Ashleigh Simon accomplished the rare feat three times in 2004, 2006 and 2007.