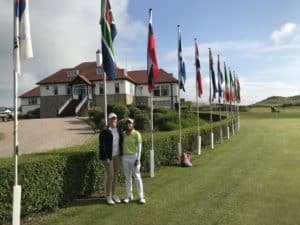 NEWCASTLE, Ireland (11 June 2019) – Gauteng duo Kajal Mistry and Kaleigh Telfer will tee it up in the Women’s Amateur Championship in Northern Ireland today.

The GolfRSA Elite Squad pair will face still competition at Royal County Down in one of the strongest fields ever assembled in the 116-year history of the premier women’s amateur event.

Telfer and Mistry have both been impressive on separate sides of the Atlantic this season.

Mistry enjoyed a fantastic run on the Sunshine Ladies Tour. Two runner-up finishes, combined with a slew of top 10s culminated in a third place finish in the Investec Property Fund Order of Merit for the Randpark golfer.

She took that form to Woodhill Residential Estate and Country Club at the end of April, where she backed up her rising star status with a rare calendar double in the SA Women’s Stroke Play and Match Play Championships.

Mistry is heading to the United States in August, where she will be taking up a golf scholarship at the Arkansas University in August.

Fellow Ernie Els and Fancourt Foundation member Telfer has been competing on the US collegiate circuit for two years.

The Auburn University sophomore was the university’s top finisher at both the SEC Championship and NCAA Austin Regional in her first season, and broke into the top 100 on the national GolfStat Rankings.

Telfer capped off the fall portion in 2019 with her first career collegiate victory at the Battle at the Beach in San Jose del Cabo, Mexico. Her five-under total helped the Tigers cruise to a 17-stroke victory, the program’s first team win since 2014. She also placed third in the Alexa Stirling.

The Bryanston golfer proudly represented South Africa in the inaugural Augusta National Women’s Amateur Championship with a joint 12th finish and in May, she was instrumental in helping the Tigers reach the semi-finals of the NCAA Women’s Golf Championship.

With entries as far afield as Australia, Canada, India, New Zealand, Russia, South Korea and the United States, the 144-strong player field taking to the renowned links in Newcastle features no less than 12 players inside the top 50 in the World Amateur Golf Ranking, including world number 14 Leonie Harm, back in title defence.

The first German champion is bidding to become the first back-to-back winner since Sweden’s Louise Stahle’s victories in 2004 and 2005.

Italian teenager Alessia Nobilo is the highest ranked player at 12th in the world, and other in-form golfers taking to the fairways at Royal County Down include 2019 Irish and Welsh Women’s Open Stroke Play champion Lily May Humphreys from England, reigning Girls Amateur Champion Emma Spitz from Austria and Irish favourite Paula Grant.

The 2019 champion gains entry to this year’s AIG Women’s British Open at Woburn and the 2019 Evian Championship, as well as next year’s US Women’s Open and the Augusta National Women’s Amateur Championship.

The field will compete for the leading 64 spots in the match play stage over two rounds of stroke play on 11 and 12 June. Telfer will launch the South African challenge at 08h36 (local SA time) and Mistry is off at 14h34 in the afternoon.