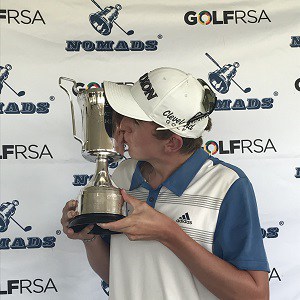 “It was my last junior event, so it was do or die,” said the 18-year-old Silver Lakes golfer.

“My first three matches all went to 18 holes and I had to fight for survival, but every victory was a step closer to the ultimate goal. It motivated me to fight harder. I took a very aggressive approach to my semi-final and final matches and that definitely paid off.”

After Mclachlan defeated Saul Moss 1-up in the first round, he had to raise his game against a tenacious Cole Stevens and it took a birdie at the 18th to beat the rising South African Golf Development Board star. Fellow Silver Lakes junior Ruhan Bester also fought valiantly but a costly bogey at 17 paved the way for Mclachlan to close out a 1-up victory at final hole.

His budding confidence went into full bloom in his semi-final clash against Shaun Jones as the former Pretoria Boys High learner mowed down the Bridge Fund Managers Junior Series winner 4 & 3 to book a date with Schaper in the 36-hole final.

Schaper – having beaten Tristan Galant 3 & 1 and Jordan Burnand 1-up respectively – faced two Sanlam SA Amateur champions in his quest to reach the final.

The 16-year-old Ebotse golfer knocked out 2017 champion Christo Lamprecht 4 & 2 in the quarters.

He faced 2018 winner Deon Germishuys in the semis, but the Stroke Play Championship winner was no match for Schaper, who swept to a 4 & 3 victory with seven birdies.”

Mclachlan felt he was well prepared for the final against the 2017 Junior Presidents Cup standout.

“I learned a lot representing Gauteng North in three SA Junior Inter-Provincials and the premier SA Inter-Provincial at Bryanston last year,” he said. “Reaching the quarter-finals in the Sanlam SA Amateur at Durban Country Club taught me a huge amount, too. I knew facing Jayden would be tough, but if I could get through the first 18 holes in front or all square, I had a chance.”

Mclachlan made three birdies on the bounce from the third to hit the front, but he paid the price when his drive at eight went out of bounds. Schaper squared the match with a trio of birdies from nine, but Mclachlan edged in front again with a birdie at 14.

“Then I hit the worst putt of the day at 16 to drop another shot,” said the Ernie Els and Fancourt Foundation player. “At 17, I had 210 metres to the flag. I hit it to six foot and holed for eagle, but Jayden hit his second to give at 18 and we were all square through the turn.”

Sticking to an aggressive game plan, Mclachlan got off to a fast start with a birdie at the first. He moved 3-up when Schaper ran into tree trouble and dropped shots at the fourth (21st) and the fifth (22nd).

“The ninth is a drivable par four,” said Mclachlan. “It’s 350 metres long and the pin was back right, so I went for the middle of the green I made a good birdie and we halved 12 in pars. Jayden almost eagled 11 (29). He left it in the throat and I holed from the fringe to halve in birdies. I made a lot of putts on the back nine, and that was the difference between the two loops.”

The pair halved the next two holes in pars, but Schaper chipped in for birdie at the 32nd hole after a great drive to keep match alive.

“Jayden had another chip for eagle at 15 (33), but he missed and had about three foot left for birdie. I was short of the green, but I hit a flop-shot to about 13 feet and made the putt for the win.

“It was a great contest and Jayden never backed away from the challenge. It’s really great to end my junior career on such a high note and to have played and beaten the best junior in South Africa made this a very memorable achievement.”