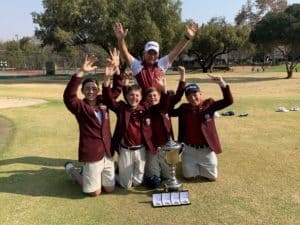 Van Zyl, who posted a non-counting 85 on day one, led the charge on the last day.

The Still Bay golfer anchored the team with an eight-under-par 80, while Coetzee contributed 82 and Reyneke carded 83. Van Wyk returned a non-counting 90.  A final round 246 catapulted the Midstream College quartet straight to the top of the leaderboard.

Midstream College team manager Nols Eksteen was over the moon with the team’s winning performance. “Three of our juniors were playing together for a third successive year, but they all know each other well and we had a great team spirit. We all know golf is an individual sport, but these boys really played for each other,” said Eksteen.

“Over the two rounds, the boys encouraged each other and used their parents and me to send messages of support. They all tried to put the best score possible on the board for the team, not for themselves. All four players contributed to this victory and that was key to our success.

“I am extremely proud of their determination and tenacity, especially in the final round and with the enthusiasm and commitment they showed this week.”

Nolte lauded Magalies Park on posing a great challenge for the juniors in this year’s event.

“Ernie Els might be close to 50, but he is still out there competing and all these kids love him. It’s a huge honour to compete in this event and these kids compete hard to make the teams. This is also a huge stage for our juniors and a championship of this stature should be played at a testing layout that contributes to the development of our juniors.

“Magalies Park is such a venue. The course has matured into a proper championship layout in the last 10 years. It is not exceptionally long, but this is not the kind of course where you hit driver off every tee; it demands good course management, planning and positioning.

“Congratulations to David Younge from GolfRSA and William von Mierlo from Magalies Park on running a very well-organised championship and presenting us with a fantastic course that will have taught our youngsters some really important lessons this week.” 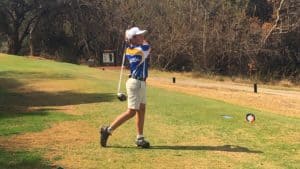 The 13-year-old learner from Laerskool Hendrik Schoeman opened with a five-over 77 but he had the measure of the 5 359-metre layout in the final round. Van der Merwe fired four birdies in his last six holes on his way to a four-under-par 68 and a three-shot victory over first round leader Marno Lange on one-over 145.

The teenager attributed his success to accuracy and execution. “I hit a lot of fairways and greens and made some key putts and that was the difference between the first and final rounds.”

Van der Merwe was six shots off the pace at the start of the day, but a trio of birdies got him within striking distance of Lange. Although he three-putted for a double bogey at 10, the Magalies Park golfer was still in the fight after Lange also dropped some shots on the back nine.

He gained the lead with birdies at 13 and 15 and sealed victory with a birdie-birdie finish.

“I holed a 19-metre putt on 17 for birdie, and after a great drive down the middle on 18, I hit a 3-wood just short of the green and chipped it close to up-and-down for birdie,” Van der Merwe said. “This is my first win on the national circuit, so I am super excited.”