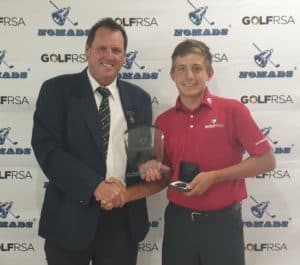 11 January 2020 – There’s nothing quite like a bit of pressure to focus the mind, even if it is self-applied, as Christiaan Maas discovered en route to claiming the Nomads Order of Merit Inland 1 tournament by five shots over fellow GolfRSA National Squad member Cole Stevens at Benoni Country Club.

Despite cruising down the 16th hole with a very comfortable five-shot lead, the Pretoria Country Club junior was feeling the heat as he closed in on his first Nomads tournament win.

“The thing is, I didn’t know I was that far ahead,” explained the 15-year-old after signing for a final-round 71 and victory on six-under-par 210.

“I was coming off three straight bogeys and the live scoring showed that Cole had made an eagle on the 10th, but actually he had made birdie. Also, I didn’t know that he had dropped a shot up ahead on the 17th. At that stage I thought I was only two shots clear.”

Despite the mix up, the 16-year-old held his nerve to birdie the 16th hole, before scrambling excellent par saves on the final two holes.

“I’m over the moon to get my first Nomads win,” he said. “They do so much for junior golf in South Africa and we all want to get a Nomads win on our CVs.

“It would have been nice to know I had such a big lead because I could have enjoyed the final holes a bit more, but it’s good to know I can deliver under that kind of pressure.”

Maas looked set to stroll to his second junior title after starting the day with a three-shot lead over Marcus Taylor and Jaime Lewis and firing a birdie on the first hole.

He made up for a dropped shot on the third with another birdie on the fifth and after two straight birdies to open the back nine, had raced into a commanding six-shot lead, but he ran into trouble on the 13th.

“I hit my drive just right of the fairway and I was stone dead behind a tree, so I had to come out sideways,” he explained. “On the next hole, I hit a great tee shot to 61 metres out. I hit a low lob wedge to the back right flag, but it was a foot too long, bounced on the fringe and went over the back of the green into the long rough.

“Two bogeys and then, on the par-three 15th, I short-sided myself in thick rough and couldn’t get it up and down and dropped another shot.”

The Gauteng North junior stopped the bleeding with the solid birdie on the 16th.

“It rained hard on both days and the course was playing very long, so they had moved the tee forward on the 16th and it was a driveable par four. I drove it just short of the green and didn’t hit a very good chip, but I made the putt and that calmed the nerves a bit.”

The win moves Maas into fourth spot on the Junior Rankings and gives him a good shot at selection for the GolfRSA Junior Proteas team for the All-Africa Junior Golf Challenge – one of the goals that he had set for himself at the start of the year.

He’ll also tick another big item off his bucket list next month when he makes his Junior Proteas debut at Leopard Creek in the GolfRSA Junior Proteas team that will challenge in the 54-hole team competition in the African Amateur Stroke Play Championship.

“I’m really enjoying my golf at the moment and I’m excited to represent South Africa. I’m grateful to GolfRSA and Nomads for the opportunities they give us on junior level and I would like to also thank my coach Nico van Rensburg for helping me get to this level. I know there is much more to come.”