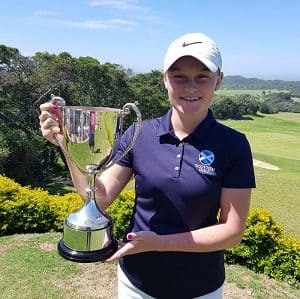 19 February 2018 – Scotland’s Shannon McWilliams might have lost to Danielle du Toit in the informal Test between South Africa and Scotland before the Border Championship, but the Aboyne golfer certainly had the measure of the East London Golf Club on the weekend as she marched to victory on Sunday.

Du Toit beat McWilliam 6-up in the curtain-raiser, but the 18-year-old Scottish Golf Women’s Squad member was the only player in the field to finish in red numbers at the challenging par-73 layout. She put together rounds of 72, 69 and 75 to beat Du Toit and team-mate Hannah McCook by three shots on a winning score of three-under-par 216.

McWilliam was four under through nine holes in round one, but a trio of bogeys over the return loop left her a shot behind McCook and two off the pace from 2016 champion, Azelia Meichtry of Switzerland.

However, she pushed to the front with another strong start in the round two.

McWilliam reeled in a trio of birdies from the third and was four-under before a double bogey at eight, but took care of the damage with gains at nine and 11. She got to five under with a birdie at the short 17th, but bogeyed the closing hole. In the final round, she offset a quartet of bogeys with two birdies to seal victory with a 75.

“I thought it was a really good tournament, although it was really tough playing the 36 holes in one day and 18 the next,” said last year’s Scottish Open Stroke Play Championship runner-up.

“We have a few tournaments back home like that and it really tests your golf, but we don’t usually play those on golf courses as hilly as this one. I’m really glad I took a caddy each day. I played really nicely over both days. I was striking the ball well and I holed a lot of putts.”

The field was tested by the weather, with incessant rain throughout Saturday, while the mercury rose to 32 degrees Celsius on Sunday, said McWilliams.

“We had two extremes, really. We came here out of the British winter, so I think I had a wee bit of a benefit on the first day. On Sunday, it was extremely hot over the first nine holes and then the wind came back and the back nine was quite challenging. We had at least a two-club wind coming home and it was definitely a challenge.

“I really enjoyed the tournament, especially the wild life on the course and all the monkeys. They were really entertaining. I think the Test against South Africa was a great idea. We had a lot of fun and a good way to warm-up for the tournament.

“I’m really happy to start the Winter Training Programme here in South Africa with a win. We play the South African Women’s Masters next on the Sunshine Ladies Tour. Hopefully I can put together another three good rounds at San Lameer.”

Two-time Scottish Golf Order of Merit winner McCook carded rounds of 71, 75 and 76, while 2017 All India Ladies Amateur champion Du Toit returned rounds of 75, 74 and 73 to share second on three-over 222.

Casandra Hall and Chloe Royston tied for second on four-over.

The South African team’s Zethu Myeki lost 3-down to Chloe Goadby, but the two-time former champion rallied with rounds 76, 76 and 74 to finish in eighth on 226. South Africa’s top ranked Kajal Mistry, who defeated McCook 2-up in the Test, finished in 13th place and the final member of the SA team Caitlyn Macnab, who halved against Gemma Batty, tied for 16th in the main event.