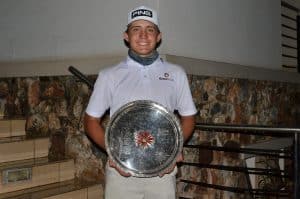 GolfRSA National Squad member Christiaan Maas claimed his fifth victory in as many weeks with a masterful 12-shot win in the GNGU Silver Salver at Irene Country Club. The victory boosted the Pretoria golfer to fifth in the GolfRSA Open Amateur Rankings. Credit GolfRSA.

October 2020 – There can’t be too many South African athletes who are able to draw positives out of the the Covid-19 pandemic, but for GolfRSA National Squad member Christiaan Maas, the hard lockdown turned out to be an unexpected blessing in disguise.

The 17-year-old found himself at odds with his swing after a sudden growth spurt early in the year.

The subsequent cancellation of all the national and provincial tournaments bought the talented youngster the necessary time to work out all the kinks and when golf re-opened in June, Maas immediately headed to his home course – Pretoria Country Club – to fine-tune the improvements.

He began campaigning on the country’s golf development circuits in September to put the new swing under competitive pressure and the results have been outstanding.

Since late September, Maas racked up four titles in as many weeks – two victories against the professionals on the IGT Challenge Tour, a play-off triumph on the new Bushveld Tour and a win on the popular Bridge Fund Managers Junior Series, which qualified him for the Regional Finals.

On Sunday at Irene Country Club, the youngster made it five for five with a masterclass performance in the Gauteng North Golf Union’s Silver Salver.

He scorched the par-72 layout in rounds of 65 and 64 to head into the final day with a five-shot lead and a third round 66 left him a staggering nine shots clear of the field. Maas sealed a 12-shot victory with a final-round 66 to win on 27-under-par 261. 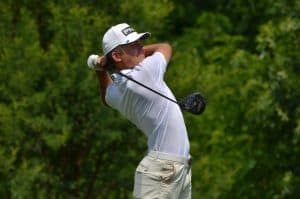 Christiaan Maas claimed a 12-shot victory on 27-under 261 in the GNGU Silver Salver at Irene Country Club. Credit GolfRSA

“It was quite funny in the end, because Casey told me the record was his 27-under at State Mines,” Maas said. “Neither of us knew about the 30-under record, so I guess we both have something to shoot for now.

“I had set myself a target of 30-under and was going nicely in the final round until the wind started blowing quite strong. I dropped a shot on the seventh, but I birdied the eighth and then we got called off for dangerous weather.”

The field had to wait out the storm and the hour and 20 minute delay left Maas feeling stiff.

“I made a string of pars on the back nine, but it was really nice to finish it off with three birdies in a row,” he said. “I have to admit that I was disappointed not to get to 30-under, but overall I am really happy with the way my game is coming along. 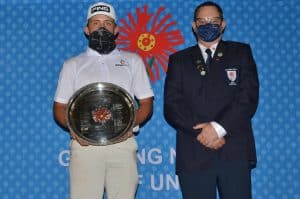 Maas erased five bogeys and a double with 32 birdies and an eagle in the 72-hole tournament, so the putter appears to be behaving really well, too.

“Yes, I am putting nicely, but I still left quite a lot of birdies out there. The putting is not quite where I’d like to be, but I shouldn’t complain. One good thing is that I don’t get hung up on the bogeys. That’s a big positive for my game. “

Maas finished second last year, so the points haul for his victory was not massive, but the win did boost the youngster from eighth to fifth in the GolfRSA Open Amateur Rankings.

“I’m really pleased about the jump. I set myself a goal at the start of the season to get into the top 3, but obviously Covid threw a spanner in the works and shortened the season, so to reach the top 5 is a still a great result.”

Given his current vein of form, it would not be unthinkable that Maas could have reached the top three with a few more provincial events on the schedule, but the Grade 11 Afrikaner Seuns Hoërskool learner is putting golf on the back burner with the final exams approaching.

“I don’t think I will be able to play in any more events, which is a bit of a blow, but exams are my main priority first right now. Hopefully I won’t lose too many spots and I can come out fighting in 2021.”

Dawid Opperman made it a one-two finish for Pretoria Country Club when he fired a final round four-under 68 to edge out GolfRSA National Squad member Ryan van Velzen for the runner-up spot.

Van Velzen, who celebrated his maiden Big Easy Tour win at Services Golf Club last week, had to settle for third on 13-under after closing with 71.