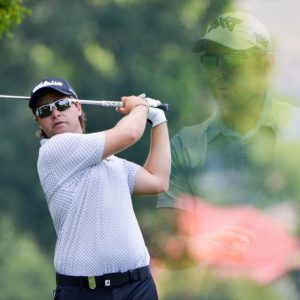 PHOTO – Charl Schwartzel inspired Ekurhuleni amateur Kyle McClatchie to break into the top 10 in the third round of the BMW SA Open, proudly sponsored by the City of Ekurhuleni, at Glendower Golf Club; credit Ernest Blignault.

13 January 2018 – Ekurhuleni amateur Kyle McClatchie drew ‘major’ inspiration from his childhood hero Charl Schwartzel to break into the top 10 in the third round of the BMW SA Open, proudly sponsored by City of Ekurhuleni, on Saturday.

The Serengeti golfer showed maturity beyond his 20 years as he navigated the demanding par-72 layout at Glendower Golf Club in 68 strokes playing alongside Schwartzel.

He fired three birdies to offset a lone bogey and boxed a cracking putt for an eagle at the par-four 12th to land a share of 10th with compatriot JC Ritchie and European Tour campaigners Richard Bland from England, Vincent Scott from Zimbabwe, Spaniard Jorge Campillo, Frenchman Matthieu Pavon and Italian Renato Paratore on nine-under 207.

McClatchie attributed his composure to the calm demeanour of the 2011 Masters champion.

“I’ve never played in front of crowds like that and I was pretty nervous on the first tee and all the way down to the first green,” said McClatchie. “I’ve always admired Charl’s calm demeanour on the course and it was great to experience it first-hand. It helped me to relax. I was probably the most calm I have been all week and I used it to my advantage.”

“I had a really solid round of golf; it was much better than the first couple of days when I hit it all over the show,” he said.

“I made some very good putts today. After a nice birdie at 10, I hit a terrible 3-wood at 11 straight left and managed to get away with par. I got on the next tee and it was a 3-wood again. There is no point in playing for second place. I hit a great tee-shot to about 15 feet and made the putt.”

“Some people are going to say I beat Charl Schwartzel, but I don’t look at it that way,” McClatchie said. “I learned so much from him in one round. It’s going to stand me in good stead in the future. Between shots we talked about a lot things and he spoke to me about schedules and different strategies with turning pro.

“Since I first met Charl when I was just five or six, his calmness on the golf course and even when he speaks has impressed me. That’s what you need out there and that’s something I will take away.”

McClatchie holds an eight shot lead over Matt Saulez from KwaZulu-Natal and he leads Garrick Higgo from Boland by 10 shots after both amateurs shot 76.

He has one hand on the Freddie Tait Cup, which was first awarded to Bernard Wynne in 1929, and is 18 holes away from joining an elite list that includes Jock Verwey, Bobby Locke, Denis Hutchinson, Dale Hayes, Ernie Els, Trevor Immelman, Charl Schwartzel, Brandon Grace and Brandon Stone.

But the leading amateur prize is the furthest thing from McClatchie’s mind.

“I am trying not to think about it,” said the reigning English Mens Stroke Play champion. “I haven’t had many opportunities to play in tournaments like this and I want to see how high up the leaderboard I can finish against these top guys first. I’ve pushed it to the back of my mind. It will be a great honour to win, but first I want to go up as high up as I can on Sunday.”