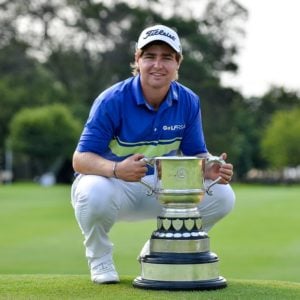 14 January 2018 – The large crowd ringside at the 18th at Glendower Golf Club cheered on popular Kyle McClatchie as he holed his final putt to capture the crown jewel of amateur golf – the Freddie Tait Cup – as the leading amateur in the BMW SA Open, proudly hosted by the City of Ekurhuleni, on Sunday.

Over the four rounds of the national championship, the 20-year-old Ekurhuleni native delivered a remarkably mature performance, carding controlled rounds of 68, 71, 68 and 71 to close out a top 15 finish on a 10-under-par 278 total.

Englishman Chris Paisley fired a six-under 66 in the final round to beat the challenge of home favourite Branden Grace to win his first European Tour title by three shots on 21-under overall.

“For us, the SA Open, SA Stroke Play and Sanlam SA Amateur titles are the Holy Grail of amateurs golf and every amateur dreams of winning it,” said McClatchie.

“I didn’t win the other two, so it’s really fantastic that I could win the Freddie Tait Cup before I leave the amateur ranks. This week was about testing myself on the biggest stage in South Africa, competing against the best golfers from the European and Sunshine Tours. I haven’t had many opportunities to play at this level and I wanted to push myself to see how high up the leaderboard I could go.

“It’s an indescribable feeling to see my name up there in the top 15 with players that have won on the world stage and contested in Majors. For me, this week more than lived up to its billing. It was the four most incredible days and I will take a lot of confidence away from this experience.”

The slight breeze died down as the Serengeti Golf and Wildlife Estate golfer started the back nine with three straight pars, birdied the par-five 13th but gave the advantage back at the next hole.

“The highlight of my round was definitely the 15th hole,” said McClatchie. “I was in the fairway bunker after my tee shot. My second shot hit the lip and popped straight down. I got it out and had 109 metres left to the flag and I holed out for birdie.”
The GolfRSA National Squad player said walking up to the final green took the sting out of the missed opportunity to tie for 12th after a late bogey at 17.

“It was the most amazing experience to walk up and to see all the people and hear them cheering us on,” he said. “The atmosphere around the 18th was amazing; it was another first for me.”

“I heard after my round that Matt ran straight from the 18th green to the first tee to wish me good luck and then went to hand in his scorecard,” McClatchie laughed.

“This week was both an exhilarating and exhausting, because everything was so new. I really loved sharing the experience with my dad (Ryan) on the bag and big ups to him for keeping me calm.

“To my mom (Wendy) and all the friends, family and fellow amateurs and GolfRSA National Squad players that walked with us and cheered me on, I am really grateful for all your support.”

KwaZulu-Natal amateur Saulez closed with a 75 to finish at two over, while 17-year-old Garrick Higgo from Boland signed off with a one-under-par 287 after a final round 70.