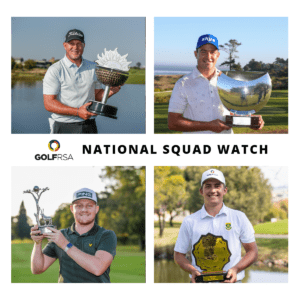 23 May 2022 – May has been a month of success for former GolfRSA National Squad members on the Sunshine Tour, with graduates having racked up three consecutive victories on the local circuit.

Tristen Strydom, an inaugural National Squad member in 2016, got the ball rolling with a dominating performance in the season-ending Tour Championship. The 25-year-old fired four rounds in the sixties at Serengeti Golf and Wildlife Estate to win by six shots and claim his maiden Sunshine Tour title.

His was the biggest victory margin in the history of the Tour Championship, and his 21-under-par 267 total was the lowest winning in the event, surpassing the previous record of 19-under set by yet another national squad graduate, Garrick Higgo in 2020.

Two weeks later it was the turn of fellow 2016 squad member Loubser to taste success.

The 23-year-old had been through a challenging time since he joined the pro ranks in 2017 but regained his playing privileges for the 2022/2023 season at the Sunshine Tour Qualifying School at Heron Banks Golf and River Estate at the end of April. In his first start of the season, Loubser got his breakthrough win with a playoff victory over Ockie Strydom in the Lombard Insurance Classic at Arabella Golf Estate.

Last week, Albert Venter – a squad member in 2016 and 2017 and a former African Amateur champion – also celebrated his first win on the Sunshine Tour.

The 26-year-old edged Stefan Wears-Taylor and Louis Abertse in a playoff for the Zimbabwean Open title at Royal Harare., earning the breakthrough with a par on the second extra hole.

To cap off the month of success on the professional circuits, former SA Amateur champion Christiaan Maas, a current member of the GolfRSA National Squad, won the season opening event of the Sunshine Tour’s Altron Big Easy Tour by three strokes in a wire-to-wire performance at Blue Valley Golf Estate.

“It’s terrific to see the guys getting their breakthrough wins on the Sunshine Tour,” said GolfRSA CEO Grant Hepburn.

“We have always known that they have had the talent to win on the professional tours, but the fact that it has taken some time goes to show just how difficult it can be to adjust to life as a professional.

“We are immensely proud of Tristen, Herman and Albert and recognise just how much hard work they have put into their games since graduating from the amateur ranks and our national squad. I hope that these wins are just the start and that they go on to forge successful professional careers.”