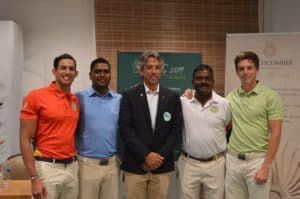 Mauritius Golf Federation President Christophe Curé with some of the competitors of the All Africa Golf Team Championship. Credit Beyond Communications.

The Mauritius Golf Federation will play host to this prestigious continental golf tournament.

After hosting the 2013 All Africa Junior Team Championship, this is the second time Mauritius is hosting a continental event.

This year’s edition will see the African continent’s best amateur players compete on one of Mauritius’ most exceptional golf courses, which shall greatly strengthen the island’s reputation as the golf destination of choice.

The biennial All Africa Team Championship (AACT)  is endorsed by The Royal & Ancient of St. Andrews (R&A) and the African Golf Confederation (AGC).

The 2019 edition will see 14 countries will battle it out in a 72-hole stroke play format from 10 – 13 October at the magnificent Mont Choisy Le Golf. Each country will field a team of four players, with the best three scores counting towards the team total in each round.

“The AACT has been played in different African countries, hosted by members of the African Golf Confederation (AGC), for the past 18 years. As the host of this prestigious event, this is a great opportunity for Mauritius to promote its growing golf culture”, said Christophe Curé, President of the Mauritius Golf Federation.

Mont Choisy Le Golf, located in the north of the island, just a stone’s throw from the Canonnier Beachcomber Golf Resort & Spa where the teams are being accommodated this year.

Designed by Peter Matkovich, the championship layout offers different views alongside its 18 holes, which are enhanced by the uniqueness and contrasting nature of the Mauritian volcanic black rocks. The variety of vegetation species will be the highlight of these beautiful landscapes, while the ponds and bunkers will reinforce the course’s exceptional character.

The Mauritius Golf Federation has teamed up with prestigious partners to host the All Africa Team Championship 2019, including the R&A, the Beachcomber Group, Mont Choisy La Réserve, SWAN, the Ministry of Sports, the Mauritius Tourism Promotion Authority (MTPA), the Chantier Naval de l’Océan Indien (CNOI), Oxenham, Helios and Beyond Communications.