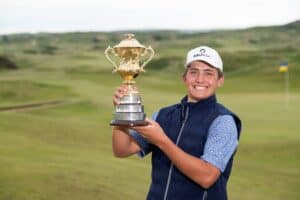 23 May 2022 – Christiaan Maas underlined his status as one of South Africa’s brightest golfing prospects when he marched to a five-shot victory in a wire-to-wire performance in England to lift the Brabazon Trophy.

When the 18-year-old Pretoria golfer first set eyes on Saunton Golf Club on a walk around the Links layout with fellow GolfRSA National Squad team-mates he was intimidated, and after their practice round in driving rain and howling wind, the former SA Amateur champion was certain he would struggle to make an impact in his first major event on English soil.

Fast forward four days and Maas finished as the only player in the field with four sub-par rounds.

After racking up 25 birdies in 72 holes, the new “King of the Dunes” continued the country’s proud history in the English Open Amateur Stroke Play Championship, etching his name alongside those of Neville Sundelson (1974), Richard Kaplan (1986), Craig Rivett (1989), Charl Schwartzel (2002) and Kyle McClatchie (2017).

Clutching the famous gold trophy and draped in the South African flag, Maas said: “I am so proud to win this tournament. It’s a big one and I’m just glad I pulled it off. After the first practice round on this golf course, it seemed impossible with all the wind and the rain. But then the weather was perfect for me all week, so I got lucky with that.” 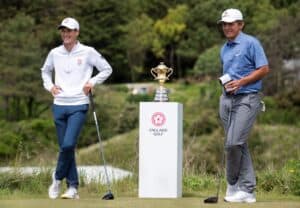 Maas began the final round one shot ahead of Edwards-Hill and three clear of defending champion Sam Bairstow and, as we have seen many times in the past, the thrived under the weight of expectation.

At the sixth, he made a tremendous recovery after a wayward approach to stretch his advantage to six shots with birdie no 4. After overshooting the green on the eighth and dropping a shot, he simply knocked in a 10-footer on the 10th for the fifth birdie of his round to go seven shots clear,

“The front nine was good,” said Maas. “I hit solid golf shots and left myself in good positions. I had a couple of flyers out of the rough and dropped a shot on eighth but made a great par on 12 when Arron made birdie to keep the momentum going. All in all, a great performance.”

Edwards-Hill never gave up the chase and when he holed a birdie putt on the 12th it looked as if he was in with a real chance to mount a charge. There could have been a two-shot swing had Maas not somehow got up and down from the ‘cabbage’ at the back of the 12th green for a miracle par.

It proved to be a telling moment. 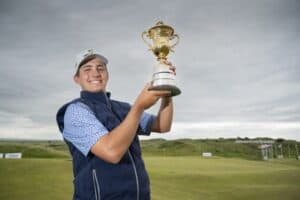 With the support of his team-mates from GolfRSA who had already finished their rounds, Maas pressed on. The teenager had the luxury of being able to bogey the par five 15th and still have a big enough cushion to take the stress out of the closing holes.

“This is definitely the best ball striking week I’ve ever had,” Maas said. “I hit the ball incredibly well off the tee and it’s the first tournament with so much bush and stuff where I never lost a golf ball. I’m very proud of that. I am really grateful for all the support I received from my team and the locals. Someone even greeted me in Afrikaans this morning! It really seemed impossible at the start of the week, it feels really good to hold this trophy, and to fly the flag for South Africa.”

If has been two years since the last GolfRSA UK Tour, due to the global pandemic, but if there was any doubts about how the national squad representatives would fair in the first stop in North Devon, the five-man delegation responded admirably. 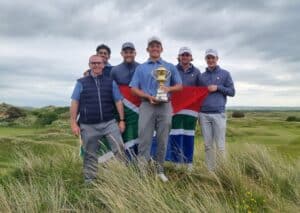 “We are absolutely delighted for Christiaan. The Brabazon Trophy was his baptism of fire in true links golf, and he absolutely embraced the challenge,” said team manager David Younge. “The entire team made the cut, and we are proud of their performance. They all showed a lot of grit, determination and commitment this week.

“We applaud England Golf and Saunton Golf Club on hosting a very successful tournament at a course that tested the players to the max. The course was a beast and a fantastic venue for us to lay the foundation for the rest of the GolfRSA UK Tour.”

The next stop for the group is Scotland where they will join three more national squad members – reigning SA Boys U-19 champion Aldrich Potgieter, Sam Simpson and Jordan Duminy – who arrived in the UK with team manager Eden Thompson on Sunday.

The group will compete in the Scottish Stroke Play at Cruden Bay Golf Club from 27-29 May.

“Our next stop will be The Links Trophy at St Andrews in early June, and we hope our No 1 Christiaan Burke will have secured his visa by then to join us at the Old and Jubilee Courses for this one,” said Younge.

Neil Homann from GolfRSA, renowned coach Roger Wessels and the squad’s fitness consultant Gavin Groves take over the management duties for The Amateur Championship, being played over the Royal Lytham & St Annes and St Annes Old Links courses from 13 – 18 June.

Two GolfRSA National Squad members at college in the United States – Christo Lamprecht and Kieron van Wyk – will join the group at The Amateur.

The final stop on this year’s tour will be Spain where the group will compete in the European Amateur at the Campo de Golf de El Saler in Valencia from 22-25 June, under the guidance of Wessels and fellow coach Graeme Whale.

With thanks to England Golf for their assistance.