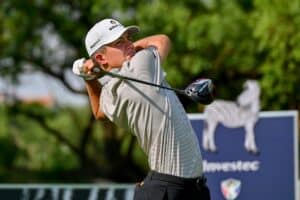 Reigning Brabazon Trophy champion Christiaan Maas has his sights set on more prestigious silverware after laying down a serious marker for success in the second of the Investec South African Open Championship at the Blair Atholl Golf & Equestrian Estate; credit GolfRSA

2 December 2022 – Christiaan Maas laid down a serious marker for success on Friday to join the extraordinary league of amateur gentlemen who have won both the coveted Freddie Tait Cup and the world’s second oldest national Open, the Investec South African Open Championship.

The 19-year-old Pretoria golfer backed up an opening round of 69 with an even more impressive display in the second round – a near-perfect seven-under 65 that shot him to 10-under-par – that moved him within three shots of overnight pace-setter Thriston Lawrence at the Blair Atholl Golf & Equestrian Estate.

As solid as that round was, Maas felt he left a few shots out there.

“I should have birdied the 10th hole from the front bunker, but I didn’t up-and-down,” said the 2022 Brabazon Trophy champion. “Then I hit a good drive on 12, but didn’t capitalise and made par, so I got off to a pretty slow start. I just told myself to stay patient, because I saw that Thriston was even-par after five holes in the first round still shot 64. I kept telling myself that and I made a couple of birdies.”

His second-round 65 consisted of four birdies on his front nine – the course back nine – and the same number of birdies coming home, plus the lone drop he made on the third.

Maas is no stranger to shooting low scores. His second-round score equalled two of his best rounds this season en route to his two victories. He shot 65 in the opening round of the English Men’s Amateur Stroke Play Championship (Brabazon Trophy) and opened with a 65 in the Altron Big Easy at the Blue Valley Golf Estate when he claimed a wire-to-wire victory in May. 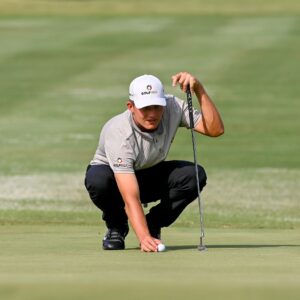 If Maas can continue to post low numbers, he would be in with a serious shout to end legendary Denis Hutchinson’s reign.

“This is the biggest and most prestigious tournament in our country and the one that every South African golfer dreams off winning,” Maas said. “I am really excited that I am in the mix for the Freddie Tait Cup, especially after missing the cut in my first two starts at Sun City. But to be honest, the SA Open is one that I really want to win. It’s the biggest honour as a South African to win your national Open, so hopefully, I can get off to a good start again on Saturday and continue playing like I did today.”

Maas made a strong start to the season in the GolfRSA South African Swing, tying for third in the African Amateur at Leopard Creek and finishing second in the South African Stroke Play Championship at Randpark.

He carried that form to his freshman season at the Texas University, where he made an immediate impact for the Texas Longhorns. The former SA Amateur champion shot par or better in seven of his nine stroke play rounds this season, including three rounds in the 60s, and shortly after the end of the Fall Collegiate season, Maas was shortlisted for the prestigious Fred Haskins Award.

Maas is putting any thoughts around this particular achievement on ice while he attends to more pressing matters.

“It’s like the crowning glory of your amateur career. But even just being in the SA Open as an amateur is a great honour, too. Hopefully, things go my way and maybe I will have that chance.” 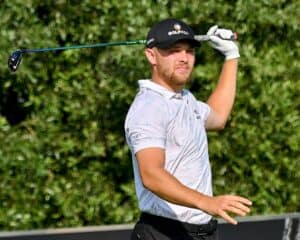 Kyle de Beer in action during the 2nd round of the the Investec South African Open Championship at the Blair Atholl Golf & Equestrian Estate; credit GolfRSA

De Beer opened with a 69 but ball-striking woes left the Ernie Els and Fancourt Foundation player to grind out a level-par 72 round on Friday. He will head into moving day on three-under alongside fellow GolfRSA National Squad member Broomhead, who carded 71 and 72 in his debut in the world’s second oldest Open.

“It was two days of decent driving, decent irons and decent putting, but I missed a few too many fairways, though, and that cost me,” said Broomhead of his first two rounds. 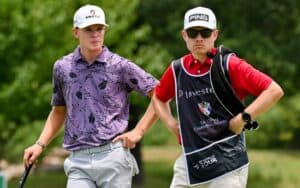 Jono Broomhead in action during the 2nd round of the the Investec South African Open Championship at the Blair Atholl Golf & Equestrian Estate; credit GolfRSA

“It’s been the most amazing experience, though. The grandeur of it all was everything I expected and more. It’s such a huge honour to tee it up in your national Open, and to play alongside all these amazing pros. I’m so grateful to GolfRSA for giving me this opportunity. Hopefully I’ve done enough to make the weekend and have two more rounds to try to conquer the beast.”

South Africa’s No 1 amateur, Yurav Premlall, and reigning Amateur champion Aldrich Potgieter were both casualties of the weather on Friday, as play was suspended twice for dangerous conditions due to lightning. Both players were two-under when play was called off for the day.

This means an even longer wait for Maas, De Beer and Broomhead as the bulk of the afternoon field will have to complete the second round on Saturday morning before the cut can be made.

It was the end of the road for the final amateur, and the youngest in this year’s field, Janko van der Merwe, after rounds of 73 and 74, but the 16-year-old has no regrets. He absolutely loved the experience.

“It was such a great experience and an honour to tee it up in my first Investec SA Open. Yes, there is an element of disappointed, but I choose to focus on the positives ,” the North West junior said. “This course this week, the way it was set up, was probably the toughest I’ve ever played. I faced some challenges and made some mistakes, but I also hit some great shots and I never stopped trying. I qualified and competed in the SA Open, so that is huge for me and I’ll use what I learned  to continue to improve.”

Only the amateurs who move on to the weekend will be eligible to continue the hunt for the Freddie Tait Cup. Major champions Ernie Els and Trevor Immelman and European Tour winners Hennie Otto, Branden Grace and Brandon Stone are among the former Freddie Tait Cup winners who have gone on to win the SA Open as professionals.