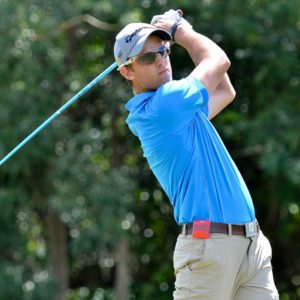 6 December 2017 – KwaZulu-Natal’s Clayton Mansfield booked his berth in the match play stage of the IGU Yes Bank 117th Amateur Golf Championship of India with a top 10 finish in the 36-hole stroke play qualifier on Wednesday.

The 22-year-old from Durban Country Club followed an opening even-par 72 with a final round 73 to easily qualify for the top 32 with a share of seventh on one-over 145 at the Karnataka Golf Association course in Bangalore.

Compatriot Malcolm Mitchell shot 79 to tie 31st on seven-over 151, but the triple Ekurhuleni Open champion from KwaZulu-Natal amateur was cut in the eight-man play-off for the final two spots.

Mansfield was in trouble after a double bogey start at 10 and another drop at 11, but he rallied to limit the damage.

“It wasn’t the greatest ball striking day for me, so I felt confident with the way I got the ball around the course in the end,” said the second year B.Com Marketing student at Varsity College.

“I missed it in the right areas and made some good up-and-downs to get the ball in the hole. I started off a little shaky, but I hit a great shot into the 15th and made the birdie putt to stop the bleeding. It helped me to regroup and I managed finish just one over.”

Mansfield closed out a five stroke victory in the Boland Amateur Open in April.

He gained a lot of international experience during the 29th Summer Universiade in Taiwan in August and the All Africa Golf Team Championship in October and he may need to draw on all this experience to get past first round opponent, local golfer Amit Kumar from Uttar Pradesh.

“I really enjoy match play, so I am looking forward to the head-to-head battles,” said Mansfield. “It also helps that I’ve had three rounds to get to know the course better, because you have to bring a certain element of aggression to match play.”

Meanwhile Thailand celebrated a one-two finish in the stroke play qualifier and won the Team Competition.

Kammalas Namuangruk shot rounds of 66 and 69 to finish first on nine-under-par 135, while compatriot Sadom Kaewkanjana sealed second with successive rounds of 69. The pair combined for 273 to beat India’s B-Team by 14 strokes in the team event. South Africa placed fourth on 296.