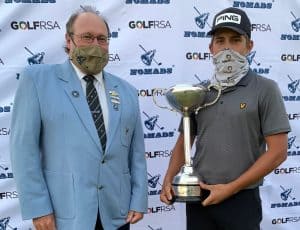 Schwartzel’s 72-hole tournament record of 272, set in Benoni in 2001, had stood for almost 20 years until the 17-year-old prodigy rewrote the amateur golf history books with a masterful display to triumph on 23-under-par 265.

Over the first three rounds of the championship, Maas was composure and confidence personified.

He began with successive rounds of eight-under-par 64 to open up a six shot lead, and no one cut into that gap as he stayed at the summit with a third round 67. The Pretoria junior was briefly dismayed that he failed to reach the 30-under target he had set himself after posting a frustrating 70 in the final round, but his mood lifted with the news of the new tournament record.

“I had no idea. That is awesome news,” said the elated champion.

“To be honest, I was really annoyed with myself. The lowest tournament record is 30-under in the Ekurhuleni Open. I came so close in the Silver Salver last year and I thought this week I’d get there for sure.

“After going 16-under in the first two rounds, I felt I could shoot 15-under in the last two rounds, but the double in the third cost me. And I just didn’t play well enough in the final round. This was one that I really wanted to win and the record takes the sting out of the disappointment that I didn’t get to 30-under.”

Maas racked up 24 birdies and two eagles over the four rounds of the championship.

After a flawless first round, he had a single bogey in the second and made amends for the third round double bogey on the par 4 11th with a three at the par-5 15th. He also erased four bogeys in the final round, but he was brutally honest in his assessment of his performance.

“I didn’t play at my best on the last day,” said the GolfRSA National Squad member.

“The fairways here are generous and when I hit the driver hard, I take out all the trouble. Even when you miss a fairway, you can still make birdie or par. I hit driver on almost every hole and executed my strategy really well over the first two rounds.

“I was still on target in the third round until my ball ended up in a tree on 11. Yurav (Premlall) said he didn’t want to play over the trees in case his ball got stuck, and I should have taken his lead. I didn’t hit driver well in the last two rounds and I left too many makeable birdie and par putts out there in the final round. I’m really happy that I got the win, but I’ve got some work to do.”

Maas finished in the winner’s circle on the junior and open amateur circuit and professional golf development tours since competitive golf started up again last September, and the Waterkloof win boosts his winning tally to 13.

With the first hurdle crossed and the Nedbank Junior Challenge coming up next week, Maas has already set himself new goals for the Nomads SA Boys U-19 Match Play Championship, which tees off on Thursday.

“Winning the double has been a goal of mine for a long time. It’s the biggest junior event on our circuit and to become a double winner will be huge honour. But I also really want to win Nedbank Golf Challenge after missing the cut by one shot in the SA Open,” he said.

“I need to use the match play stage to straighten out the driver, because you have to hit it straight at the Gary Player; a lot straighter than I’m hitting it now.”

Maas won the gruelling SA Amateur Championship in February when he ousted Englishman Jack Dyer 3 & 2, but lost 4 & 3 to Premlall in the final of the ProShop Northern Amateur. He knows the next few days will be tough.

“Match Play is unpredictable and you have to know when to stick to your game plan and when to get more aggressive. It all depends on your opponent does. When someone comes out hot, you have to respond. But whatever the outcome, I’m looking forward to the battle.”

The Stroke Play winner will face fellow GolfRSA National Squad member Jaden Deltel in his first match of the day.

Premlall, meanwhile, carded a closing even-par 72 to finish alone in second. The Glendower golfer will go up against Morris Schiefner. Third-place finishers John-William Blomerus and Jordan Duminy will meet Jordan Wessels and Ivan Verster respectively in the first round.