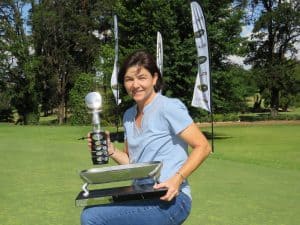 Making her debut on the mid-amateur circuit after an 11-year break from competitive golf, Smit was in a class of her own as she led from start to finish Krugersdorp Golf Club to win on 16-over 232.

Successive rounds of 76 saw Smit start the final round with a five shot edge over two-time former champion Vanessa Smith and a seven-shot lead over Winter.

“I was fine at the start of the round, but a couple of holes in I started feeling the nerves and the mistakes crept in,” said the Vryheid native, who closed with an 80. “I dropped four shots in three holes with bogeys at six and eight and a double at seven.

“I had a good bounce-back birdie at nine, but doubled 10 and dropped at 11. Then I had a good talk to myself and from there I put all thoughts about winning out of my mind and just played shot-for-shot, hole-for-hole.”

The mind-set change has the desired effect and Smit fired five straight pars before giving another shot back to the field at 17. Smit could play the final hole with zero stress, since none of her pursuers mounted a challenge big enough to put pressure on her.

“It was quite nice to play the last hole knowing I was almost at the finish line,” she said. “I had hoped to finish in style with a birdie. I raced the putt from the fringe just past the hole, but it felt great to tap in for par and the win.

“Gosh, this week took me back. I used to play junior golf against Vanessa and Sandra and I both played for KwaZulu-Natal. I put competitive golf on the back burner for my kids, but now that they are also competing, it’s nice to get out there again. I haven’t lifted a trophy since the Free State Open years ago. Don’t ask me when; that will give my age away.

“The course was absolutely magnificent. The greens were superb and the layout is very interesting and testing. This week was a great reunion for me and I’ve had an incredible amount of fun. This was such a fantastic experience, irrespective of the win and I really hope we can get more of the old guard excited about mid-amateur golf and keep growing the championship.”

Southern Cape’s Winter took second on 237 with a final round 78, and Smith from Western Province finished in third on 237 after signing for an 82. 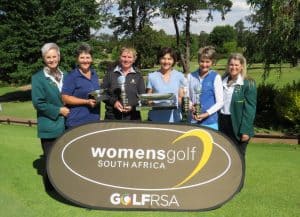 Carina Theron also went wire-to-wire to win the B-Division. The Bloemfontein golfer carded rounds of 85, 86 and 87 to win by one shot from Randpark’s Valda Ford on a total score of 258.

Rosa-Linda Wessels overhauled second round leader Angela Krugel to win the C-Division. The Durbanville golfer posted rounds of 32, 36 and 37 win by three points on 105.