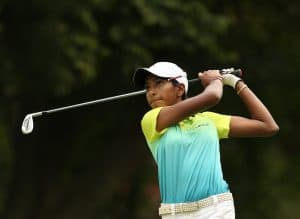 GolfRSA Elite Squad member Kaiyuree Moodley has a two-shot lead at the 36-hole mark of the 2019 Annika Invitational USA at the World Golf Village; credit GolfRSA.

21 January 2019 – Loads of rounds at the coast in South Africa and a little home-cooking proved a winning combination for South Africa’s Kaiyuree Moodley, who surged to a two-shot lead in brutally windy conditions in the Annika Invitational USA.

Last year, the 17-year-old Bryanston golfer upstaged some of South Africa’s best coastal amateurs to win the Southern Cape Open and the Boland Open. On Sunday, the GolfRSA Elite Squad member did the same to the top-ranked field tested by similar conditions at the World Golf Village’s Slammer and Squire course.

A sublime four-under-par 68 netted Moodley the low round honours and the lead on four-under 140.

“All that experience at home really paid off,” said the 2018 Youth Olympian. “Most of the tournaments we play at the coast are in really windy conditions and I learned a lot about club selection and course management.

“That really came into play on Sunday. We had some wind in the first round, but on Sunday, it blew all day around 25 km per hour, with gusts up to 50 km per hour.

“I played nicely in the first round, but I knew I could do better. My mom figured all I needed was a bit of home, so she cooked us a dhal and chicken curry. I guess it hit the mark, too. I’m really pleased with the way I handled myself in the conditions on Sunday. It was a real test of patience.”

Moodley was three off the pace at the start of the second round after an opening 72. She birdied the first, second and fourth holes to overhaul first round pacesetter Annabell Fuller from Britain and three more gains on the back nine catapulted her to the top the leaderboard.

“It was so cold that I couldn’t even feel my fingers, and at times, I was wearing three layers of clothing,” said Moodley.

“Club selection wasn’t the easiest with varying wind speeds, but all those rounds in Cape Town really paid off. I hit every fairway and only missed one green in regulation.

“I missed very makeable birdies on 14, 16 and 17 and I had two bogeys, but managed to bounce back each time. I dropped a shot on the ninth hole after landing in the greenside bunker, but birdies at 11 and 12 kept me in contention. At the 15th I dropped another shot with a careless three-putt but I rolled in a nice putt at 18 for a birdie finish.

“It was a really good round, under trying conditions. Shooting a low score is always nice, but doing it in a huge event like the Annika Invitational USA with such a deep field and in such trying conditions makes it even sweeter. I’m looking forward to today’s final round. No doubt it will be another tough one, but I’m going to dig deep, fight hard and have fun.”

American junior Julia Gregg carded a second round 69 to move into second on her own, and she is one shot clear of Fuller, Sweden’s Ingrid Lindblad and Yuka Saso from the Philippines.

The GolfRSA Elite Squad member had three bogeys on the bounce from the second hole and surrendered four more shots from the seventh, including a double bogey 6 at the eighth, to turn eight-over. Macnab birdied 11 and 14, but further drops at 12, 16 and 17 saw the Serengeti junior inish in a tie for 57th on 14-over 158.

The 72-player field for the 11th Annika Invitational USA, presented by Rolex, features the best female junior golfers from around the world and includes seven of the top-25 girls in the Rolex AJGA Rankings and two in the top 10.

Should Moodley make it to the winner’s circle today, she will receive an invitation to compete in the Florida’s Natural Charity Classic on the Symetra Tour in March.