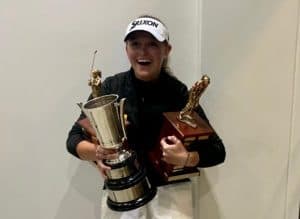 October 2020 – South Africa’s leading amateur Caitlyn Macnab picked up where she left off with yet another dazzling victory in the Ekurhuleni Women’s Championship this October.

The Serengeti golfer Macnab cemented her spot at the top of the Womens Golf South Africa Open and Junior Rankings in February with a superior performance in the Aon SA Women’s Amateur Stroke Play and Match Play Championships.

However, the double triumph at Royal Johannesburg and Kensington Golf Club would mark a final competitive appearance for the GolfRSA Elite Squad member before the government issued the Level 5 hard lockdown to prevent the spread of the corona virus.

Like her peers, Macnab took to the fairways as soon as golf was re-opened in June, but a heavy academic load in her final school year restricted her time on the course. Yet there was no stopping the talented golfer in her first ranking event at Glendower Golf Club.

Macnab lived up to her number one billing with a dominant performance, firing rounds of 71, 72 and 67 to claim the Open Championship title with a three-shot victory on six-under-par 210 and bagging the Junior and Closed Championships titles to boot.

“I am ecstatic to finish the season on such a high note,” said the 18-year-old Macnab, a finalist in the Emerging Athlete category in the recent Momentum gsport SA Women’s Sports Awards.

“Our final matric exams are around the corner, so I knew it would be my last event of the season. To be honest, I was a little apprehensive when we teed off at Glendower. I kept fit during the lockdown and I tried to keep my game sharp. I hit balls into a net in the garden, practised my drills and putted on the bedroom carpet. I got out on the course as soon as golf re-opened, but you never really know how your game will hold up under competitive pressure.

Macnab said she battled a balky putter in the first two rounds, but she found the stride that saw her dominate in the 2019 season during the final round.

“Over the first two rounds I missed a lot of putts inside two to three metres. The final round began much the same, but then, on the ninth hole, I holed a clutch putt for birdie and that was the moment the momentum shifted,” she said.

She reeled in five more birdies on the home stretch, leaving the opposition behind. “Just like that, I found my rhythm and stroke and the confidence started flooding back,” said the Grant Veenstra Golf Academy member. “The putts just all went my way.”

Her triumph in the Ekurhuleni Women’s Open in 2017 signalled the start of a long stretch of winning performances for Macnab and she was over the moon to bring it home once again.

“Knowing that I would only be playing this one ranking event did put some pressure on me, so I am really excited that I was able to pull it off. This performance has really boosted my confidence. Once I’ve completed my final exams, I’m going to work really hard on my game to start the 2021 season with a bang. I will be heading to the States next August to take up a golf scholarship at Texas Christian University, so I want to make those first six months count.”

Fellow Serengeti golfer Nadia van der Westhuizen fired a final round 68 to clinch the runner-up spot on three-under 213, while Pretoria Country Club’s Danielle du Toit finished third on 223. The GolfRSA Elite Squad member is home on a break from Purdue University in the States.

Bongiwe Shabalala led the way in the A-Division in the Senior Championship, with Kerry-Ann Murgatroyd the winner in the B-Division.

Visually impaired Charlene Pienaar not only won the Disabled Golfer division, but also impressed with a joint second finish in the Open C-Division, while Charisse Moses won the C-Division Closed and Lorato Mosiane the C-Division Juniors.