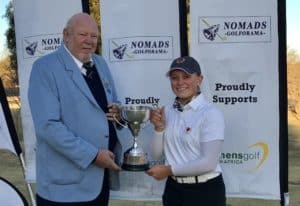 ORKNEY, 2 July 2019 – South Africa’s number one ranked Caitlyn Macnab lived up to her star billing when she celebrated her 10th start in the Nomads SA Girls Championship with a trophy finish on Tuesday.

The 17-year-old from Serengeti Estates carded a final round one-under-par 71 to edge out fellow Ekurhuleni golfer Kiera Floyd by one stroke on four-over 220, lifting the title and the ultimate prize it carries – a start in the Duke of York Young Champions Trophy in September.

GolfRSA Junior Proteas Macnab, Floyd & Kaiyuree Moodley claimed a sixth place finish in the Toyota Junior Golf World Cup two weeks ago, but as soon as the team arrived back on home soil last Sunday, Macnab and Moodley both went down with swine flu.

“Kai had to withdraw and I was a doubtful starter after spending four days in bed, but I came because I had to try,” Macnab said.

“I have dreamt of winning the Nomads SA Girls since I first teed it up as a seven-year-old. It’s the most amazing feeling to be the champion; I am just over the moon. I was really nervous on the first day, because I hadn’t hit a ball for nine days. I didn’t expect to lead the first round, but after that it was all about playing for the win.”

Macnab opened with a one-over 73, but shot 76 in round two to surrender the lead to Floyd.

The 14-year-old Ebotse junior headed into the final round with a one stroke lead after successive rounds of 74, but Macnab levelled the score with a birdie start. She pulled two shots clear when the Floyd bogeyed the par three second. Two holes later, though, Floyd was back in control.

“I ended up in the water at six after my tee shot stayed right,” Macnab said. “I had very little room to work with after I ended up behind a tree and we were back to all square when I made a soft double.”

Macnab and Floyd are both members of the Grant Veenstra Junior Golf Academy and have played golf together for years. “I knew it would go right down to the wire,” said Macnab.

“We have played against each other and we’ve together for Ekurhuleni in the SA Women’s IPT and the SA Women’s 72 Hole Teams. We won the All Africa Junior Golf Challenge together and in Japan, we both shot 69 in the final round. I knew she would fight right up to the last putt.”

Floyd took a one-shot advantage into the back nine, but a bogey at the 11 left the pair tied on five-over.

“The 12th is a short par four and I hit a good drive that finished just left of the green, but I flew the chip well past the pin,” said Macnab. “I holed a four-metre putt for birdie to go one ahead and I had a two-shot lead when Kiera dropped at 13. She made a fantastic bogey, though. Her approach shot landed next to the fence and she had to take an unplayable. She nearly chipped it in, but the ball hit the flag.”

Despite a few nasty lip-outs Macnab managed to salvage par down the stretch. 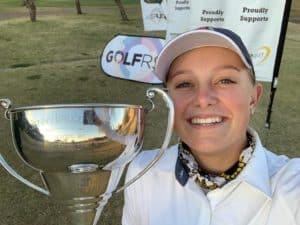 “I was so, so happy when I sunk that final putt on 18,” said Macnab while posing for a quick selfie with the Jenny Bruce Trophy. “I’m absolutely over the moon to get this done. It’s not always easy to come into a tournament as the favourite. There is a lot of pressure on you. I wasn’t at my best, but in the end, all that matters is the win.”

In the Silver Division, the lead changed hands several times until Rumbi Chisango replaced compatriot Tracy Humbira at the top. The Zimbabwean junior had a three shot lead coming down the last few holes, but Cheslyn Jacobs gave the home crowd plenty to cheer about when she forced a play-off on 45-over with a final round 80.

“We went back to the par five 17th and Rumbi went first and hit her drive in the bush on the right. I hit mine down the fairway and my second shot pitched on the edge of the green. Rumbi hit her second into the rough on the left, but she was on the green with her third.

“I lagged my first putt to a foot and tapped it for the win after she left her birdie putt short. I am so excited, because this is huge,” said the 14-year-old Jacobs from Potchefstroom. “This is the biggest achievement of my career. I’m down to a 7.2 handicap and I’m going to work really hard so I can play in the Championship Division next year.”

North West Women’s Golf had further cause for celebration when Lesego Aphane completed a wire-to-wire victory in the Silver Division. The 18-year-old Seasons Eco Golf Estate golfer carded rounds of 39 and 38 to win by six on 77 points, with Lea van der Merwe from Gauteng North second on 71 and Western Province’s Jaden Visagie third on 69.

Maegan Webster also led the Copper Division from start to finish. The Gauteng North junior shot 34 and 31 to finish on 65, with Erin Brinkman from Eastern Province finishing in second on 51 with rounds of 24 and 27.