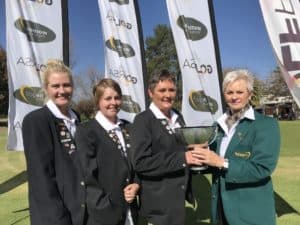 5 June 2019 – Eight months after they won promotion in the 58th SA Women’s Inter-Provincial Championship, Mpumalanga B went the distance at Maccauvlei Golf Club with a dominant performance to win the Challenge Trophy at the SA Women’s 72-Hole Teams Championship in wire-to-wire style.

“Winning at Devonvale really injected confidence in the camp and we had high expectations for both teams this year,” said captain Patrizia Lombard.

“We believed we could win and taking the lead in the first round just strengthened our resolve to take it to the finish line. Danielle and Nicole did an exceptional job for the team on a very tough golf course. The course itself is fantastic and was in pristine conditions, but the greens were really fast and slippery – nothing like the greens we play at home. It was a test for us and they excelled. 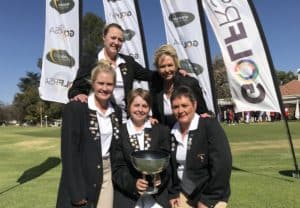 “We are also really proud of the A-team, who tied for fourth with North West. They were lying fifth going into the final round and managed to square with North West. This means that we will be fielding one team in the Swiss Team Trophy and one in the Challenge Trophy next year.

“All the hard work and sacrifices was worth it and we applaud our president Hanlie Uys and manager Alida Schoeman who they believed in us and supported us unconditionally. We’d also like to thank Womens Golf South Africa and Free State Ladies Golf Union for hosting a fantastic event.”

Nina Grey, Bobbi Brown and Isabella van Rooyen sealed a runner-up finish for Western Province C on 638, KwaZulu-Natal B took third on 643, while North West and Mpumalanga A shared fourth on 661.