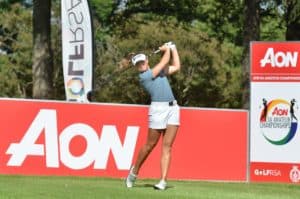 16 February 2020 – Caitlyn Macnab seized the initiative on day one of the Aon South African Women’s Stroke Play Championship to open up a one-shot lead at Royal Johannesburg and Kensington Golf Club.

Things didn’t quite go her way at the start of the day, but once she hit her stride, there was no stopping South Africa’s top ranked amateur.

Macnab made a birdie start on the par five opening hole at the East Course, but surrendered shots on the fourth and five. The 18-year-old Serengeti golfer rallied with birdies on six and eight, had another bogey on the par four ninth and while Macnab was putting a string of pars together on the back nine, 14-year-old Kyra van Kan set the early clubhouse target with one-under.

“I was getting just a little frustrated when everything just clicked,” said Macnab, who boxed three successive birdie putts from the 15th to take the lead with a three-under-par 69.

“I had a lot of lip-outs, but the putts finally started dropping at 15. I was really happy to get those three birdies to get myself into contention. The courses are both in phenomenal condition, but I am looking forward to the West. It’s a bit shorter, so you can be a little more aggressive.”

Fellow GolfRSA Elite Squad member and the GolfRSA No 2 Kaylah Williams from Western Province is finished a close second.

The 2019 Nomads SA Girls Rose Bowl champion had a lengthy layoff after knee surgery in October, but showed a return to form with a solid two-under-par 70.

Du Preez – the leading amateur in the first two Sunshine Ladies Tour events in 2020 – was two-under through six, but she dropped five shots over the next five holes. The Ernie Els and Fancourt Foundation member finished strong though, carding three birdies to get back to level par. 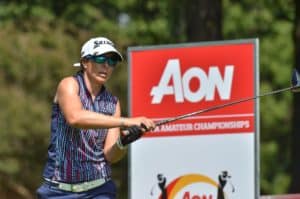 Heather Kruger from Gauteng and KwaZulu-Natal’s Sabiha Bacaus matched each other with rounds of 83 to share the lead in the B-Division (handicap indesx 6.6 – 15.3)

Kamaya Moodliar – also from KwaZulu-Natal – finished third on 12-over, with Samyra Fos from Reunion and Jordan Pillay from Western Province a further two shots adrift in joint four.