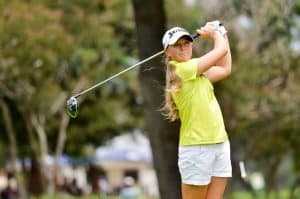 25 March 2019 – Womens Golf South Africa’s golf development programme certainly lived up to its billing as the six juniors in its GolfRSA Elite Squad stormed through the field to grab the six leading positions in the Nomads SA Girls Rose Bowl Championship on Monday.

The first round at the Langebaan Golf and Sports Club teed off in a stiff south-easterly wind that gathered strength during the morning session and continued to pummel the field in the afternoon’s second round.

South Africa’s number one ranked junior Caitlyn Macnab co-led the Championship Division after a first round 71, and the Ekurhuleni golfer strengthened her position at the top with a second round 75.

Macnab pulled out a narrow one shot lead on two-over 146 over Kaylah Williams, who tops the Open Amateur standings.
The Western Province golfer returned rounds of 74 and 73 to finish second, two shots clear of former champion Kaiyuree Moodley from Gauteng, who went five shots better than her opening 77 in the second round to secure third on five-over.

Symone Henriques from Gauteng, coming off a top 10 finish in the Jabra Ladies Classic, claimed a share of fourth alongside Kiera Floyd from Ekurhuleni, who finished third in the Sunshine Ladies Tour event at Glendower last Friday.

Henriques registered rounds of 76 and 74, while 14-year-old Floyd held a share of the first lead after an opening 71, but slipped to six-over after carding 79 in the afternoon session.

Reigning SA Women’s Amateur champion Jordan Rothman made it six for six for the GolfRSA Elite Squad when she moved into sixth position on the Championship Division leaderboard.

Rothman from Western Province opened with an expensive 82, but the recent South African Junior International winner rallied in the second round to shave 10 shots off her opening score.

Annalie Swanepoel from Western Province finished in seventh on 13-over, Boland junior Shani Brynard sits in eighth a further shot back, while GolfRSA B-Squad members Kera Healy and Megan Streicher respectively finished ninth on 18-over and 10th on 19-over.

In the Silver Division (handicaps 6.6 to 15.3), Anita Chen opened up a three-lead over fellow Western Province junior Nelia with rounds of 91 and 94. Jemma Louw, also from Western Province, is third and four off the pace.

The first round of the Bronze Division for handicaps 15.4 to 29.3 ended in a three-way tie with Western Province trio Isabella Williams, Kim Albertus and Tamsen Skippers sharing the lead on 26 points.

Written and released by Lali SMacnab on the move in Nomads SA Girls Rose Bowltander on behalf of GolfRSA.