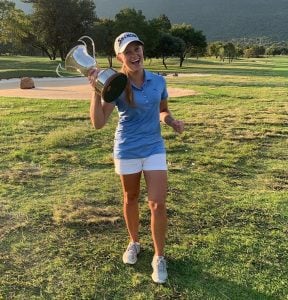 GolfRSA Elite Squad member Caitlyn Macnab from Ekurhuleni rose to number one in the Open Amateur and Junior Rankings inside the first two months of the 2019 season; credit GolfRSA.

BENONI, 8 March 2019 – Caitlyn “Cat” Macnab thrives on challenge. That is evidenced in every swing this petite rising star makes in pursuit of the perfect strike. And in the way she casts her rod in the sea and plays a cob until she guides it safely to shore.

“I guess if it wasn’t golf, I’d become a professional angler,” says the Benoni junior.

“I tried ballet once, didn’t like it because I couldn’t point my toes. I like shopping, hanging out with friends, going to movies. My family do a lot of water sports and I like wake-boarding and slalom ski. I’ve got a passion for cars, shoes, music and watches. And I love fishing.

“It’s relaxing, quiet, and peaceful. It’s completely different to what I do on the golf course. It just eases my mind. Golf and fishing are similar, because they are solitary sports that require a lot of patience. Both demand perfection. The difference is that I intend to make a living with golf and I fish for fun. It’s a great balance for me.”

On Sunday, the 17-year-old shot to the top the Womens Golf South Africa Open Amateur rankings with a three-shot victory in the North West Open – just a few weeks after she rose to number one in the Junior Rankings.

“That’s two big boxes ticked on my bucket list for 2019,” said Macnab. “I worked really hard for this and to hold the number one spot on both rankings is incredibly satisfying. But there are a lot more I still want to achieve this year.”

Macnab announced herself in 2017 with eight top three finishes last year before she broke the winner’s tape in the Ekurhuleni Women’s Open.

Two months later Macnab, who packs a huge drive and a lethal short game, beat club champions from all over South Africa to lift the GolfRSA Champion of Champions title at Glendower – a feat she would repeat last year.

The GolfRSA Elite Squad member carried her winning form in to the 2018 season.

She helped South Africa claim its second victory in the All-Africa Junior Challenge in her national debut and made her first appearance in the Toyota Junior Golf World Cup in Japan.

She was the low scorer for South Africa in the Espirito Santo Trophy at the World Amateur Team Championship in Ireland, boosting the team to a joint 15th place finish, and tying 12th overall in the Individual Standings.

Pretty impressive, considering 162 golfers from 54 nations teed it up at Carton House.

She placed third in a world-class field in the qualifying round of the prestigious Girls British Amateur Open Championship in September.

Back home, she guided Ekurhuleni to their first-ever victory in the SA Women’s Inter-Provincial and finished the season in the top three on both rankings.

Her 2019 season started with a bang. First in the season-opening Eastern Province / Border Stroke Play, followed by the winning performance at Magalies Park last weekend. 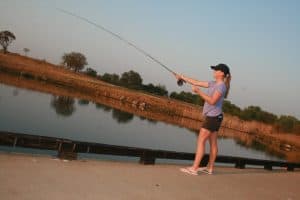 Macnab might fantasize about landing the big one like all fishermen, but her goals in golf are clearly defined. “I’m going to have a career in golf and my goals are set in stone,” she says.

“I also want to go shark cage diving, bungee jumping and sky diving. And I recently read that a European golf instructor Steve Waltman invented a golf club that also doubles as a fishing rod. That’s going on my bucket list, too.

“With a lot of hard work and dedication you can be good at anything you set your mind to. But you also have to be good at laughing and having fun. It’s all about the balance.”