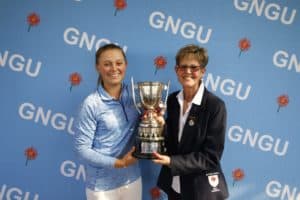 PRETORIA, 9 July 2019 – In-form Caitlyn Macnab made it a trio of titles in as many appearances with another impressive display of front-running in the Gauteng North Women’s Open on Sunday.

The 17-year-old Serengeti golfer won the Individual title as she guided Ekurhuleni to victory in the WGSA 72-Hole Team Championship in June and claimed the Nomads SA Girls Championship at Orkney Golf Club at the start of July.

Macnab closed with a four-under-par 68 at Centurion Country Club to win by three shots from Gauteng’s Symone Henriques on one-over 217. 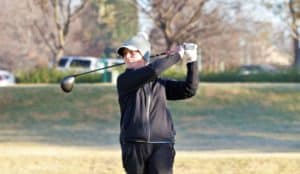 Caitlyn Macnab in action during the Gauteng North Women’s Open.

Macnab carded rounds of 76 and 71 to start the final round three shots behind fellow GolfRSA Elite Squad member Kiera Floyd. She turned one-under after a birdie at seventh and edged ahead of Floyd with a brace of birdies at 11 and 12. The Ekurhuleni golfer gave back a shot to the field at 13, but rallied with a birdie-birdie finish to earn her fifth amateur victory – a win that strengthened her position at the top of the Open Amateur rankings.

Henriques has also been enjoying an impressive recent run of form and her closing 70 for second on 220 was her third successive top three finish after joint second in the Limpopo Championship and third in the Nomads SA Girls.

Nadia van der Westhuizen carded 72 to finish third on 223 and Floyd was a further stroke back after a final round 77. 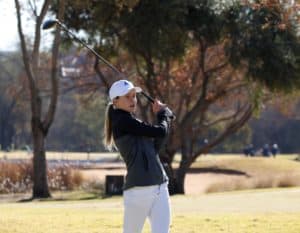 Macnab and Swanepoel were not the only winners on the day. Centurion local Ronel van Wyk won the lucky draw prize – a trip to Reunion Island!

Thanks to a partnership between Gauteng North Golf Union, Reunion Island Golf Association and Reunion Island Tourism Board, Van Wyk bagged a trip for one person that included flights, transfers, accommodation and an excursion underwritten by partners Air Austral, Boucan Canot Hotel and Reunitours.