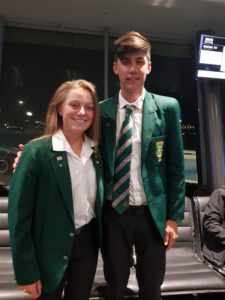 Caitlyn Macnab and Sam Simpson are flying the flag for South Africa in the prestigious Duke of York Young Champions at Royal Portrush in Northern Ireland; credit GolfRSA.

9 September 2019 – Two of South Africa’s brightest golf prospects – Caitlyn Macnab and Sam Simpson – fine-tuned their games for today’s start of the 19th Duke of York Young Champions, while HRH Prince Andrew kept an eye on the action in Monday’s practice round at Royal Portrush.

The Duke of York was visiting the celebrated Open Championship venue in his role as the founder and host of the highly-rated 54-hole stroke play championship, sanctioned by the R&A.

The GolfRSA pair will hunt South Africa’s first victory in the event when they tee it up in field of 66 players that features top ranked juniors and national champions from 35 countries.

“We are incredibly excited to once again bring two of our top talents to compete in the Duke of York Younge Champions,” said Womens Golf South Africa president Sally Greasley.

“It is absolutely fantastic that GolfRSA has once again been afforded the opportunity to give our national champions the chance to compete against the best talents in junior golf. This tournament not only carries significant world amateur golf ranking points, but it always attracts the cream of junior golf in the world.”

Macnab from Ekurhuleni leads the GolfRSA Open Amateur and Junior Rankings and Simpson from Western Province ranks fifth in the Open Amateur rankings and second in the Junior standings.

Both juniors were members of the GolfRSA Junior Proteas teams that successfully defended the Girls and Boys titles in the All-Africa Junior Golf Challenge. Macnab and Simpson also made valuable contributions during the Toyota Junior Golf World Cup in Japan.

“Caitlyn gained further international experience in the R&A Girls Championship and the quadrennial Astor Trophy in Canada in August, where she helped the GolfRSA Proteas to a tie for second, while Sam built his experience travelling with the GolfRSA National Squad and competing in top amateur events in Great Britain and Ireland.

“Both juniors have also performed exceptionally well on home soil with victories on the junior and open amateur circuits and we are confident that they will hold their own here at Portrush. They will be able to support each other as they have been drawn together for the first round.”

Macnab fell in love with the championship layout after her first look on Monday.

“This course is insane; it’s absolutely incredible and extremely challenging. I can really understand why it is on the Open rota and Royal Portrush has gone straight to the top of my favourite golf course list,” said the Serengeti golfer.

“One thing that struck me in the practice round is that every shot requires perfection. You will drop a shot if you are not 100% focussed on every shot. It’s not like most courses where there is a hole or two where you can take breather.

“The biggest challenges will be handling the weather and staying on your game with every single shot. There also isn’t a prevailing wind here. We played it in one direction in the practice round, but if it blows from another direction today, it’s a whole different course.

“It’s really cool that Sam and I have been drawn together. We will be playing in the afternoon, which means we’ll probably get the worst of the wind, but we are super excited to get going.” 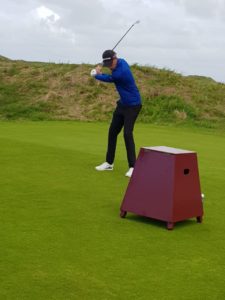 Simpson recently teed it up in the Junior Players Championship, where he secured his spot on the International Team for the Presidents Cup with a top 50 finish at TPC Sawgrass. He is also looking forward to measuring himself against the challenge Royal Portrush poses.

“I was glad that the course suits my eye, because the layout is very particular and I completely agree with Cat; it demands 100% focus,” said the Bellville golfer.

“It was quite windy during the practice round and the wind will have a huge impact on our strategy for the course. It wasn’t ideal that we only had one practice round, but we tried our best to get a good look at all the holes. Tee shots are going to be crucial, because the fairways are tight and the rough is pretty penal around the edges of the fairways.

“I haven’t been at the top of my game in recent weeks, but we all go through that. Luckily the experience of playing at the TPC Sawgrass really prepared me well. Royal Portrush is everything you see on the television, but just a lot more daunting, so I’m really happy Cat and I are playing together for the first round. Looking forward to going out there and see what we can do.”