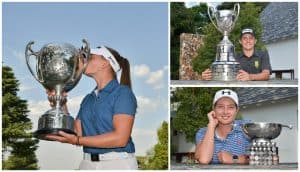 19 February 2021 – South Africa’s No 1-ranked Caitlyn Macnab became just the 12th woman to successfully defend her SA Amateur title since 1906, while 17-year-old Christiaan Maas continued his remarkable rise when he lifted the men’s title on Friday.

The 2020 champion, who had relinquished her SA Stroke Play title to Streicher earlier in the week, showed no mercy to her opponent as she racked up an eagle and 10 birdies to comfortably wrap things up by the 27th hole of the 36-hole final.

While Streicher may have initially contributed to her own demise with a smattering of bogeys, she simply had no answer to the brilliance of Macnab, who played the last 14 holes in an incredible 10 under par.

With the win, Macnab became the first player since Ashleigh Buhai (nee Simon) in 2007 to achieve the SA Amateur double. 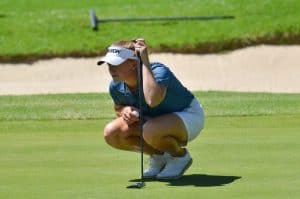 The 19-year-old started the week slowly, posting an opening round of 75 in the Stroke Play, but got consistently better as she put more rounds under the belt.

“I hadn’t played a lot of tournament golf in the last year, so it really took a while for me to warm up,” said the Serengeti golfer. “I peaked just in time for the match play.”

Reaching the turn at 5 up, one could have forgiven Macnab for playing conservatively and protecting her lead. Instead, she went the other way.

“Match play is not over until it’s over,” she said. “Even though I had the lead I wasn’t going to take my foot off the pedal and luckily the putts started to drop.”

Macnab, who had a hole-in-one during her semi-final round, followed up an eagle on the 19th hole with a pair of birdies to put her in an almost unassailable position at 8 up, but she wasn’t done yet.

Three birdies later and Streicher’s suffering was over, with Caitlyn Macnab writing her name in the history books of South African amateur golf.

“This is huge; it’s massive,” said the GolfRSA Elite Squad member. “The first win last year was very special, but this one is huge. I am incredibly proud of this achievement and it’s hard to put into words what this means to me.

“To have done this, gives me so much confidence and self-belief. I hope to win a few more titles on the amateur circuit and contest on the Sunshine Ladies Tour before I take up my golf scholarship at the Texas Christian University in August.” 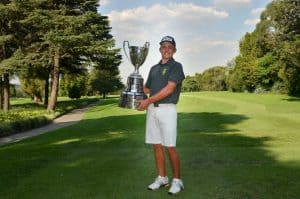 In the men’s event, Maas made good on his promise of playing aggressive golf in his 36-hole final against Englishman Jack Dyer.

Dyer, the winner of the stroke play qualifier earlier in the week, eased into an early lead, but a birdie at the eighth saw Maas draw level.

After a run of five birdies in seven holes, the Pretoria Country Club member never looked back. Although Dyer fought back to win the 23rd and 24th holes and bring the game back to all square, birdies on the 25th, 26th, 29th and 30th holes put the young South African three ahead with four to play.

He closed out the match with two hard working pars.

“I knew I had to be at my best because Jack has played so well all week,” said Maas. “I made a lot of long putts and I got away with a few wayward drives, but thankfully my short game was strong today. Even when I put myself in trouble of the tee, I managed to find ways on to the greens and the putter did the rest.

“I’m delighted because I proved that I can compete with the best on the amateur stage, not only in South Africa, but around the world. This is the biggest tournament we play in South Africa and I’m so proud that I have won it. It gives me so much confidence going forward.” 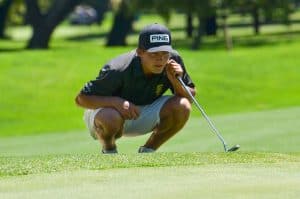 Having shown himself to be one of the hottest prospects in South African golf, Maas has a few goals of his own left to tick off.

“My main goal this year is to try and win the Freddie Tait Cup at the SA Open as the leading amateur, like Casey did last year. I’ll also be trying to win the SA Stroke Play and the African Amateur next year.

Seeing Casey and Martin winning them has certainly pushed me to work even harder and have more belief in my own abilities.”

With the three winners of the SA Swing events aged 18, 17 and 17, it is safe to say that South African golf has a very bright future ahead. 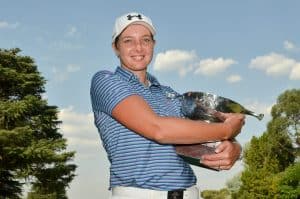 Winning the Flight Division was “a huge bonus” for Pretoria golfer Charlene Oosthuizen.

“My only goal this year was to make the match play field, so standing here with the trophy in my hands is pure bonus,” gushed the excited Waterkloof mid-amateur. “The biggest win I’ve had before this was club championships; no wonder I can’t stop smiling.”

Oosthuizen lined up against Zane Kleynhans from Centurion in the 18-hole final.

The 31-year-old made a birdie start and was 5 up after six holes, but the 13-year-old Centurion golfer rallied to win the seventh and ninth holes. 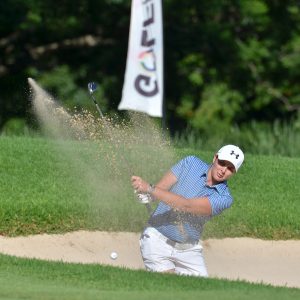 “She began striking the ball really well and her putts were dropping and she put me under quite a bit of pressure. My game went the other way. I missed fairways and putts and suddenly I found myself 1 up on the 15th,” Oosthuizen said.

“I had a little talk to myself and managed to win the 16th with a par and the match 3 & 1 with a bogey on the 17th. I’m just over the moon with this win, and I’ll take the confidence to mid-amateur circuit this season.

“This was probably one of the biggest fields we’ve drawn and this championship grows every year.

“I was amazed at the variety of players that entered this year, including a load of 10 to 14-year-olds, who made their debut. There was also quite a few mid-amateurs and seniors who competed. It is absolutely fantastic to see so much young talent coming through the ranks. Women’s golf in South Africa is definitely going places.”