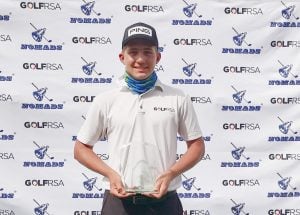 13 January 2021 – GolfRSA National Squad member Christiaan Maas once again underlined his credentials as one of the games future stars when he produced a grandstand finish to defend his Nomads National Order of Merit Inland title on Tuesday.

Maas opened with an imposing four-under 68 to match early first round leader Christopher Bagnall at ERPM Golf Club, but even more impressive was the way he closed the tournament – firing four birdies on the bounce from the 13th hole for a round of 63 and a 13 under par winning total.

It was the second time in as many months that the 17-year-old Pretoria teenager celebrated success at the Boksburg venue.

Having racked up five titles in seven weeks after competitive golf resumed in September last year, including a runaway 12-shot victory in the GNGU Silver Salver at the end of October, Maas rode his red-hot form in the South African Open Championship qualifier at ERPM in December.

The Affies learner reeled in seven birdies and an eagle en route to a blistering eight-under-par 64 to secure the first of four spots on offer into the country’s flagship event at Sun City.

And Maas did not seem to lose any form over the festive season.

The Pretoria Country Club golfer offset two bogeys on day one with a six-pack of birdies and surrendered just one shot in the final round as he charged his way to victory. A successful title defence also guaranteed that Maas remains firmly planted in fourth place in the GolfRSA Under-19 Junior Rankings.

Maas was justifiably pleased with the winning performance ahead of the South African Swing, which tees off next month.

“I was very happy with the way I struck the ball during the tournament,” said Maas. “I didn’t have a lot of chips, because I hit a lot of greens and I putted really well on the final day.

“It was great to walk away with another win, but if I’m honest, I was annoyed that the 17th got the better of me again. I messed it up during the qualifier and couldn’t birdie the par five in the two rounds during in the Nomads NOoM. There is still some work to be done, but I will have a chance to fine-tune my game at the Free State and Gauteng North Opens before of the South African Swing.” 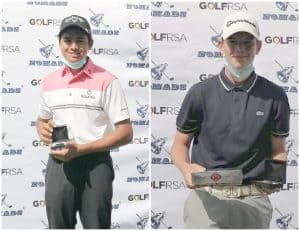 Premlall – also a member of the GolfRSA National Squad and a three-time winner last season – carded rounds of 69 and 68 for a seven-under total, while State Mines golfer Bagnall eagled the par-5 17th on his way to a final round 73 and third on three-under.

The Free State Open at Maccauvlei (15-17 January) and Gauteng North Open at Pretoria Country Club (22-24 January) will raise the curtain on what promises to be another exciting South African Swing in February.

The South African Swing comprises GolfRSA’s flagship men and women’s tournaments and kicks off with the SA Stroke Play Championship at Randpark Golf Club from 1-4 February.