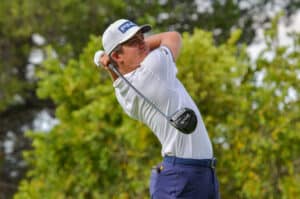 GolfRSA No 1 Christiaan Maas strengthened his bid for the SA Amateur double when he opened up a two-shot lead on 15-under in the second round of the SA Stroke Play Championship at Randpark Golf Club; credit GolfRSA.

His scorecard was far from tidy, with three birdies, two eagles and trio of bogeys colouring the first eight holes, but Maas hit his stride after the turn. A second eagle at the par-5 second, backed up by birdies on three, four and six catapulted Maas to the top spot on 15-under.

It’s a big week for the GolfRSA No 1, who has not been in the winner’s circle since defending his title in the Gauteng North Silver Salver last October.

The 18-year-old Pretoria golfer made a disappointing start to the annual South African Swing, and his title defence in the SA Amateur at Royal Johannesburg & Kensington a fortnight ago was cut short when he was knocked out in the second round.

But Maas began trending towards some fine form during the first two rounds of the African Amateur Stroke Play Championship at Leopard Creek last week and a strong finish to tie for third was just the fuel needed to fire up his desire to add his name to the illustrious list of GolfRSA Amateur double winners.

“I birdied the third, and nearly made eagle on

four and birdied six. A little disappointed not to make birdie on nine. I went with driver on the ninth and set myself up nicely, but I hit a very poor pitch from 50m to 15 feet and missed the birdie putt.

“Today was seven-under with three terrible bogeys, so hopefully I can eliminate the mistakes in the next two rounds. I made a good couple of long putts, so that confidence is there.” 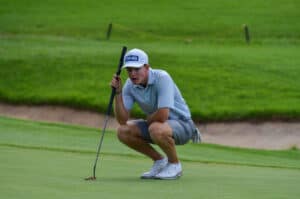 Jonathan Broomhead went one shot better than the leader and vaulted to second on 13-under, courtesy of an eagle and eight birdies and Humewood’s Altin van der Merwe, the first-round pacesetter, carded 69 and will start moving day three off the pace.

Behind the Ernie Els and Fancourt Foundation member, the top is packed with in-form players.

Reigning SA Amateur champion Kyle de Beer and Christiaan Burke tied for fourth on 10-under after signing for a pair of 65s, while GolfRSA National Squad stablemate Yurav Premlall is a further stroke adrift after taking route 66.

Simon du Plooy matched Broomhead’s 64 to grab a share of seventh on eight-under alongside 2022 SA Amateur finalist Rory Franssen from Scotland and Sam Bairstow from England. The two Brits carded respective rounds of 68 and 67. 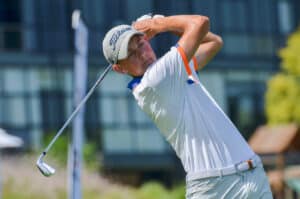 Boland junior Dylan Kayne fired his way into the top 10 with a superb 65.

And 16-year-old Boland junior Dylan Kayne played himself into the top 10 with a superb 65 to join Bob Geurts from the Netherlands and Keegan Mclachlan, who both shot rounds of 70, on seven-under-par 137.

Last week’s African Amateur winner and former SA Stroke Play champion Casey Jarvis is not completely out of the title hunt, either.

Two years ago, Jarvis completed the rare calendar double and became the youngest champion in SA Stroke Play history at the age of 16 years, 6 months and 17 days. That year, the State Mines golfer fired rounds of 66, 65, 67 and 65 to triumph on 25-under.

Jarvis began his campaign with a lukewarm 71, but a 67 in the second round moved him to six-under.

“Nine shots are a lot to make up if the leader is running hot, but the game felt really good today and the putter was warming up,” said the 18-year-old national squad player, who offset two bogeys with five birdies and an eagle at the par-4 sixth. “It’s a tall order but if I can keep a clean card and the putter behaves, I can hopefully shorten the gap tomorrow.”

The 144-strong starting field was cut to 68 players on two-over or better, who will contest the final two rounds.