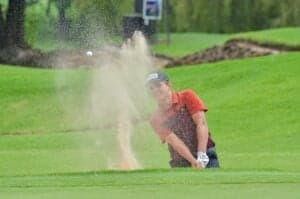 GolfRSA No 1 and 2021 SA Amateur champion Christiaan Maas will be bidding for the SA Amateur “double” after taking a four-stroke lead in the third round of the South African Stroke Play Championship at Randpark Golf Club; credit GolfRSA.

23 February 2022 – Christiaan Maas not only put himself in contention to achieve the coveted SA Amateur “Double”, but the 2021 SA Amateur champion could rewrite the records books after extending his lead on moving day in the South African Stroke Play Championship.

Maas lived up to his GolfRSA No 1 billing when he fired a spectacular nine-under-par 63 on moving day at Randpark Golf Club.

The 18-year-old Pretoria golfer reeled in seven birdies and eagled the par-5 fourth on the Firethorn Course to finish three shots ahead of playing partner Jonathan Broomhead on 24 under par.

He is just three strokes shy of the championship’s 72-hole record, set by Sweden’s Oliver Gillbert at Pecanwood in 2018, but Maas admits he has another target in mind.

“I’d be really proud to set a new 72-hole record, but I believe I have a good chance to go 30-under-par,” he explained. “That’s been my personal target for some years now and I’ve come close a few times, but this is probably the best chance I’ll have of getting there. I’ve been driving the ball well and hitting my irons close this week, and I holed some good putts today. The biggest difference between today and rest of the week was that I kept a clean card. If I can do that tomorrow, I have a good chance to achieve my goal.”

Playing partner Broomhead overturned a bogey start with seven birdies and an eagle at the par-5 14th on his way to an eight-under 64 round that earned him sole second on 21-under.

“Not the ideal start, but I managed to make three birdies on the trot from the second to steady the ship,” said the 21-year-old for the Durban Country Club member. “I kept pace with Christiaan, but I missed a few chances on the back nine. He would make a birdie, and then I’d make one; we had a lot of fun out there. I’m excited for tomorrow, but I’m not going to change the way I play. I can only control what I do out on the course, so I’m going to hit the shots and we’ll see where it leaves me.”

GolfRSA National Squad member Christiaan Burke, Scotland’s Rory Franssen and Sam Bairstow from England – respectively third, fourth and fifth – are more than a couple of shots adrift, but a fast start to the final 18 could see the trio narrow the gap on the frontrunner.

Burke was nine-under through 17 in a round that featured an eagle and eight birdies but bogeyed the closing hole. The Potchefstroom golfer’s 64 will see him start the final round at 18-under.

Franssen, a member of Scottish Golf’s national squad, and the country’s top ranked player in the world amateur golf rankings, had an equally impressive run. The University of Missouri graduate also went nine deep with seven birdies and an eagle, but he surrendered a shot on the par-4 11th. The 23-year-old sits eight shots off the pace at 16-under.

Bairstow, who burst from the blocks with a brace of birdies, carded a seven-under 65 and finished on 15-under. The Hallowes golfer racked up a further three gains, and eagled 14, giving just one shot back at the shorth eighth.

Day four at Randpark is bound to be a day of high drama with Maas taking centre stage and the 54-hole leader only has one strategy for the final push. “Make as many birdies as possible. That’s my only game plan. I really wanted to get to 30-under through three rounds, but I didn’t, so that is the target for the final round.”