1 December 2020 – The Covid-19 nationwide lockdown may have put the brakes on their 2020 season, but if you thought top ranked amateurs Christiaan Maas and Jordan Duminy were done for the year, think again.

The trio boosts the amateur tally to eight in the R19.5 million tournament, supported by Nedbank and Sun International and co-sanctioned by the Sunshine and European Tours.

Also vying for the Freddie Tait Cup – awarded to the leading amateur after the 36-hole cut – are SA No 1 and reigning SA Amateur champion Casey Jarvis and GolfRSA National Squad members Kyle de Beer, Yurav Premlall, Christo Lamprecht and Sam Simpson. The quintet was selected in October to fill the five exempt spots offered to GolfRSA. 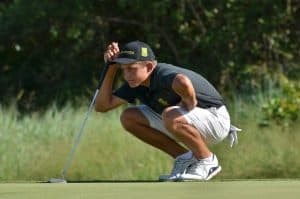 He recorded three victories on the golf development circuits – two on the IGT Challenge Tour & a play-off triumph over Sunshine Tour campaigner Dylan Naidoo on the new Bushveld Tour – in September and won his second Bridge Fund Managers Junior Series in early October.

Then the 17-year-old stunned with a runaway 12-shot victory in the GNGU Silver Salver at the end of October. He shot rounds of 65, 64, 66 and 66 at Irene Country Club to win on a staggering 27-under-par and brought that red-hot form to the SA Open qualifier at ERPM Golf Club.

The Pretoria Country Club golfer racked up seven birdies and an eagle on the par-five 13th to catapult to the summit with a blistering eight-under-par 64. His pace-setting target went unchallenged and he booked the first of four spots on offer for Sun City.

“My coach Nico van Rensburg told me that he, Ernie (Els) and Dean (Van Staden) used to play ERPM at least 36 holes a day, twice a week, as juniors! He told to make sure I hit the fairways, because ERPM is not a long drive contest,” Maas said.

“I was a little nervous to start. My first tee shot went right and found the bunker, but I hit a hit a good sand-wedge to 12 feet behind the hole and boxed the putt for birdie. I hit my approach right into the grass on the second, a shocking shot. Luckily it’s a par five and managed to save par.

“I hit another simple second on the third and left it short, but I chipped in for birdie. I hit the green in two on four. The eagle putt lipped out, but I tapped in for birdie to three under. That was the start I had hoped for and I could build from there. That chip on the third was key.”

The Els for Autism Ambassador was glad he played a few practice rounds at the Gary Player Country Club, just in case he made it.

“One of my goals this year was to qualify for the SA Open. I was disappointed that I couldn’t improve my ranking enough to be selected, but who knew a lockdown was coming? Now that I’ve earned my place in the field, I am so excited to get going. It’s going to be such an amazing opportunity to gain experience and learn from the best.” 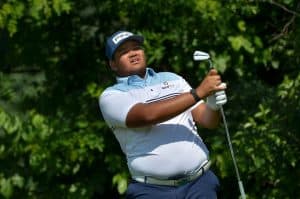 Louis Oosthuizen Junior Golf Academy member Duminy and Mbetse, who had to secure their spots in a six-man play-off at Modderfontein Golf Club, are equally fired up.

“I so pleased that I pulled this one through,” said Duminy, who edged out Slade Pickering to win the prestigious Bobby Locke Invitational at Parkview Golf Club just a fortnight ago.

The 18-year-old also reeled in the Kingswood, Pinnacle Point and George Open titles and finished second in the Mossel Bay Open to win the Southern Cape Golf Union’s GolfRSA Race to 2021 in November.

“It was a tough scoring day and I didn’t bring my best stuff. The pins were set up in some really tight places and the wind was blowing pretty hard in the morning. I got it to three-under through nine, made a double on the par five (13th) but birdied 14 for a two-under 70. Then the long wait started for the field to finish.

“We played the par-five 10th in the play-off. I was in the first group of three and first off the tee. I hit a decent drive and second and was on the green with my third. I had about 20 foot to the pin and holed the putt for birdie. We had to wait for the second group to finish, but the birdie guaranteed my spot.

“I missed the cut at Randpark, but I have no regrets. I learned so much from my first experience. I’m really looking forward to be playing in my second SA Open and to play it at one of the greatest courses in South Africa. Can’t wait.” 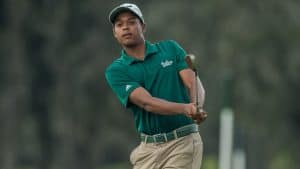 University of South Florida Junior Massimo Mbetse will make his South African Open Championship debut after securing a spot in a six-man play-off at the Modderfontein Qualifier; credit USF Golf

Mbetse, playing in the afternoon, started with a birdie and made three on the bounce from the sixth to start the back nine on four-under.

“I birdied 10 and I got it to seven-under through 14 holes after birdies on 12 and 13, but I bogeyed the 15th and made silly mistakes on the last two holes to finish bogey, triple bogey,” said the 20-year-old University of South Florida student.

Mbetse, a third year Business Marketing student, was named Srixon/Cleveland Golf All-America Scholar this year. He also made the AAC All-Academic Team and was named to the USF Athletics Honour Roll.

“My parents live in Melrose and I came home in March when our season wrapped. Then lockdown happened. Our NCAA season was cancelled, then the next season. I couldn’t go back anyway due to the flight restrictions. It was nice to get back out there when the golf courses re-opened.”

He joined Randpark Golf Club & competed in the club championship. He also played two IGT and Bushveld Tour events to get the rust off and recently tied for sixth in the Bobby Locke Invitational.

“I am very excited to play in my first SA Open. It’s been a life-long dream. I’ve never played the Gary Player Country Club, but of course I know it by reputation. I’m looking forward to the practice round tomorrow and teeing it up on Thursday.”

Nearly 300 hopefuls teed it up at the three qualifying venues, hoping to bank one of only 12 spots on offer.