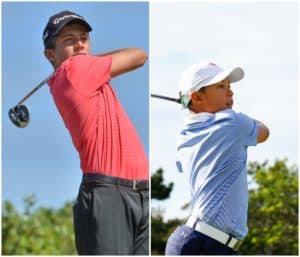 Christiaan Maas led the first round of the Dimension Data Junior Open, while Fabrizio du Abreu took pole position in the Under-15 Challenge at Fancourt; credit Ernest Blignault.

GEORGE, 23 June 2019 – A bogey-free four-under 68 catapulted Christiaan Maas to the top of the standings in the Dimension Data Junior Open, while Fabrizio de Aubreu surged to a two-shot lead in the Under-15 Challenge at Fancourt on Sunday.

Both courses took a heavy beating with substantial downpours on Friday and Saturday, which compelled GolfRSA tournament director David Younge to take pity on the young guns.

“Both courses are playing extremely long and with more rain forecast in the first round, we decided to set the courses up a bit shorter than usual,” Younge said. “As expected, the cream rose to the top, with most of the leading players on both course in the current top 20 of the Junior Under-19 and Under-15 rankings.”

Maas racked up a quartet of birdies to set the pace at Fancourt’s Montagu Course.

The Pretoria Country Club junior will have to keep his foot on the pedal, though, when the Under-19 action moves to the Montagu Course for Monday’s second round.

Du Abreu also made the most of the less demanding set-up on Sunday and fired four birdies in a flawless tour of the Outeniqua Course.

The Woodhill teen has maintained a steady rise to 13th in the Under-15 rankings since his breakthrough in the Sun City Under-13 Challenge last June. He claimed a top 10 finish in the Nomads SA Boys Under-15 Championship in January and in April, the South African junior came out on top in his age category at the 2019 Kids Australian Open at the Riverside Oaks Golf Resort.

Western Province junior Jack Buchanan opened with a two-under 70 to finish two off the pace.

South African Golf Development Board protégée TJ Sandys, Phil Snyman, Michael Ferreira and Sakota – who both featured in the final group of the Sun City Under-15 Challenge last week – are a further shot adrift in joint third.

Werner Potgieter from East London Golf Club stayed in touch with a 72, and Leopard Park’s Jordan Wessels, who the Under-15 Division at the Gary Player Country Club  last Friday, is also in the mix after carding 73.